And blunt bangs and black lipstick.

Besides the fashion, of course, bleached brows and blunt bangs have practically become the focal points on many runways this season (see: Marc Jacobs's bizarre catwalk looks). And another celebrity — and designer — is jumping on the barely-there brows and thick fringe bandwagon.

On Tuesday, Versace launched a new campaign starring a completely unrecognizable Lily James with a black shaggy haircut, blunt, straight-across bangs, and invisible eyebrows. Her charcoal lip contrasted against the white brows but matched her hair and outfit, which consisted of a black corset dress with a plunging neckline paired with leather opera gloves in the same color. Gold bangles featuring the brand's signature Grecian square design were stacked on either wrist, and she completed the look with rings, gold and pearl earrings, and a black handbag with metal detailing.

The designer shared campaign imagery to its Instagram with the caption, "Actress Lily James stars in the #VersaceFW22 campaign from Donatella Versace."

Other posts showed off more pieces from the FW22 collection, including black strappy mega-pumps over leather leggings and a menswear leather jacket and patterned tote bag. Donatella shared additional snaps to her personal Instagram that showed James in a red, ruched corset dress with a sheer midsection. "When @lilyjamesofficial got in front of the camera she transformed!" the brand's creative director captioned the gallery of photos. "Wearing the collection unlocked her own personal attitude and she took on a new energy and power. That's exactly how you should feel when wearing Versace!"

Besides starring in a Versace campaign (already a massive honor), this week was chock-full of exciting feats for James. On Tuesday, the star earned her first Emmy nomination in the Outstanding Lead Actor in a Limited or Anthology Series category for her portrayal of Pamela Anderson in Pam & Tommy. Her co-star Sebastian Stan was also nominated for his role as Tommy Lee. James opened up to Deadline about receiving the recognition.

"I'm so proud because we were really in it together and felt so joined in our ambition to really try and do something with this," she said. "So I'm so happy and so thrilled we're both in this mad situation. It makes it way better."

She also added that the show was made to shine a light on the couple's awful experience and take Pamela's side. "I think everyone is more open and prepared to hear these stories and look at it and their own culpability, which is the biggest thing for me, we're looking at things we've been taught as young girls, things we're been shown. We've put up with behavior for so long and it's been very, very toxic … so to be part of a show that explored that and kept that momentum going hopefully is just so important to me." 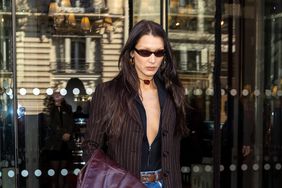