Laura Harrier was born in Chicago and lived in New York for the past decade. She is officially over winter. “I’m not down with the cold anymore,” says the 27-year-old. “I’m ready to be in the sun.” The actress recently relocated to milder Los Angeles, as many are wont to do when their careers are skyrocketing (she announced her West Coast arrival on Instagram with a scenic photo from atop the Griffith Observatory).

And it’s likely she’ll rise even higher. Last year Harrier’s role as Peter Parker’s love interest, Liz Allan, in Spider-Man: Homecoming catapulted her from relative obscurity to worldwide fame. The second cinematic reboot of Marvel’s beloved web-slinging superhero was the most diverse to date: Zendaya also stars as Parker’s bookish classmate (and presumed future romantic partner). “It’s so rare that you see two women of color in an action movie,” Harrier says. “It was so forward-thinking to have us each play completely independent characters.”

Though she proudly identifies as black, Harrier is in fact biracial—her father is African-American, and her mother is of Polish and English descent. “I feel really connected to both sides of my family,” she says. “When I was growing up, there were never people on TV who looked like me, so it’s very cool to be able to represent that on camera.” That’s not to say Harrier didn’t have some small-screen icons of her own, at least stylewise. “Hilary Banks from The Fresh Prince of Bel-Air is my number-one influence,” she says. “She’s a bad bitch, always unapologetically herself and unafraid to stand out and be beautiful.”

She knows a thing or two about that as well. A chance encounter with a location scout during a photo shoot at her parent’s house led to Harrier’s impromptu modeling career when she was in high school. What started as catalogue work quickly grew into ad campaigns for American Eagle and L’Oréal, which prompted her to defer enrollment in New York University’s Gallatin School of Individualized Study. But being a model was never her end goal, so she eventually chose to attend the prestigious William Esper Studio acting school instead (“the hardest thing I’ve ever done, but the best decision I’ve ever made,” she says). The two careers have since become intertwined: After regularly appearing in the front row at Louis Vuitton’s runway shows, Harrier was named a face of the French label’s spring 2018 campaign. “Nicolas Ghesquière is such an artist,” she says. “Everything he designs is modern and fresh but references history in a thoughtful way.” She cites the designer’s latest presentation, held in the catacombs of the Louvre, featuring brocade jackets paired with sneakers. In addition, Harrier is a Bulgari ambassador, and she fronted a Calvin Klein underwear ad last year.

11 Things to Know About Our Style Crush, Laura Harrier

“I’ve always loved dressing up,” she says. Fashion has been central to Harrier’s life since she was a kid, which explains her refined taste in clothing. The red-carpet tour for Spider-Man put her on the style map thanks to unique, impactful looks by Brock Collection, Ganni, and Prabal Gurung, put together with the help of her stylist, Danielle Nachmani. “Style is not a formula for me—it’s instinctual,” Harrier says. “I know right away if I like something or not.”

The same goes for scripts. “I’m drawn to roles that address social issues and injustices in the world,” Harrier says. She just wrapped filming Black Klansman, Spike Lee’s upcoming thriller based on the true story of a black undercover cop who infiltrated the Ku Klux Klan in the ’70s, co-produced by Get Out director Jordan Peele. “Working on that set was a surreal and incredible experience.”

She’s Gotta Have It, the Reboot, Gives Spike Lee’s Classic the Authentic Female Perspective It Needed

Harrier also uses her online presence to start conversations about complex issues. “I think those of us with a platform have a duty to talk about all the fucked-up stuff that’s going on,” she says. “I would feel really uncomfortable watching things go by and just posting pretty selfies.” Mixed in with the requisite glamour shots on her feeds—lounging on a boat in Venice, posing in front of a waterfall in Bali—are politically minded posts about the Time’s Up anti-harassment coalition and black revolutionaries.

“I feel very fortunate to be acting at a time when women and minorities are getting more of a voice,” she says. “We’re in the middle of a moment where barriers are starting to be broken down. But I just want them to be smashed all the way.” 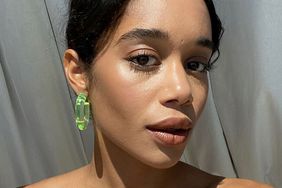 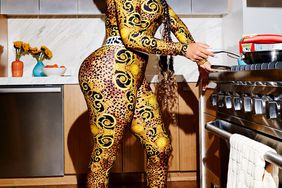