Laura Dern won the Best Supporting Actress award last night for her role as the fast-talking, tough-as-nails Los Angeles divorce lawyer Nora Fanshaw in Netflix’s Marriage Story. But it isn’t Nora’s epic feminist monologue that her fans love to quote back to her when they see her on the street (or at the mall).

“I will not not be rich!” Dern laughs, recalling the infamous Big Little Lies quote, “I hear it almost daily!”

Backstage in the press room at the Golden Globes, Dern recalled a recent encounter with a fan while shopping at Forever 21. “It is amazing how diverse a group [of fans] it is,” she stated, “including a very frustrated father of a teenage girl in a Forever 21 yesterday. He was trying to be hip for his daughter, screamed out the line to me, and she was so embarrassed. And I loved him for it.”

While the fact that Dern is a Forever 21 shopper may be her best-kept secret, the award winning actress's prolific career — spanning over four decades —is the stuff of legend. And she comes from legends, too, as she's part of a Hollywood dynasty that includes her parents, Academy Award nominees Bruce Dern and Dianne Ladd. And here's a piece of Hollywood trivia: At age 15 in 1982, Dern had the honor of being Miss Golden Globes — but the experience was a lot different back then. Everything seemed so simple, recalled Dern, "with my grandma driving me up to the Hilton in her Grey Corolla ... I changed in the bathroom.”

Speaking to Instyle backstage at the Globes, Dern also shared why she calls her fellow castmates, from her Marriage Story co-stars Adam Driver and Scarlett Johanssen, to her Big Little Lies squad that includes Reese Witherspoon and Nicole Kidman, part of her family. “We're teaching each other to love the stories. You know, we’re privileged to be part of inspiring [each other] as actors," she said. "It creates a family.” 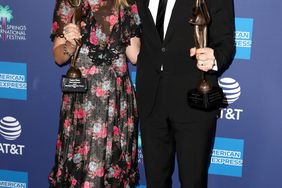