Adam Driver is that rare, masterful actor that you are drawn to, no matter what character he plays onscreen. It’s no wonder then, that at California’s 31st annual Palm Springs International Film Festival opening gala last night, Laura Dern described the experience of being around him as “staggeringly delicious in every way.”

Presenting the gifted thespian with the Desert Palm Achievement Award for acting, Dern said: “It's beyond exciting to have your breath taken away when you get to know an actor's work and to feel truly in awe of them. Such happens when one is watching and working with the amazing Adam Driver."

Dern considers Driver “her family,” working with him initially in 2017 for Star Wars: The Last Jedi and recently in 2019’s Marriage Story.

"Adam is a seeming dichotomy, in that opposites are always present in his characters and within his humanity. But in fact, he blurs the lines so seamlessly that new emotions are defined and he gives space for us to truly feel all,” she enthused.

The internet has taken a liking to Driver of late — and even the teens have taken notice. "One of my favorite moments was, I was sitting with my teenage daughter, and she said, ‘Mom, I was thinking about Adam in Marriage Story. He can make watching him in a silent moment, the most exciting thing I have ever seen,’" recalled Dern, quoting her 14-year-old, Jaya Harper. "That's so the truth!"

Dern also quipped that "unfortunately," Driver is an amazing listener.

"Which is great if you are working with him as an actor. But guys, I have told him most of my secrets and almost everything about my personal life. Damn!”

Driver was not the only “family” member at the gala, Dern’s parents — the much loved actors Bruce Dern and Diane Ladd — made a surprise video cameo as well, in support of her receiving the Career Achievement Award for Little Women and Marriage Story.

Having just filmed a movie about divorce, Dern added that, “ I just saw my two divorced parents high-fiving — I was crying. That was really moving for me ... Every kid kinda wants to see their parents together. So that was incredible … mind-blowing!" 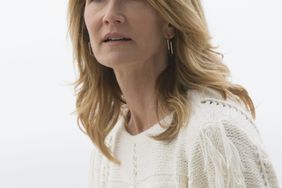