Lady Gaga Recreated Her Most Iconic Outfits for a Voting PSA

Lady Gaga has just one word for you: Chromati—no, sorry, VOTE.

Mother Monster released a PSA on Friday directed at those who “don’t have a plan to vote, are undecided,” or “are unsure if they even believe in voting at all.”

For nearly three minutes, Gaga encouraged her fans to do their part, all the while dressed in (some of) the most iconic ensembles of her career — we’re talking her shimmering Super Bowl leotard, the blue cut-out bodysuit (and heavy platinum fringe) she wore in the “Poker Face” music video, the geometric metallic minidress and yellow hair she debuted during the Monster Ball tour, an elaborate pink insect-like headpiece she unearthed earlier this year, her Joanne-era crop top, denim shorts, and pink cowboy hat, and, of course, the meat dress.

“Let’s be real, you know who I voted for,” the singer told viewers. “But believe me and listen to me now. Even if you disagree with me, your vote still matters to the world.”

“I’ve never been shy to make my voice heard,” she continued. “I’ve said a lot of things a lot of different ways, wearing a lot of different outfits, makeup, hats, dresses made out of meat, jumping off of stadiums, screaming on stage … I may have seemed to shift and change, but one thing that has never changed is my voice, and what I believe. My voice will be heard this election. Will yours?”

It's not too late to vote, but if you have a mail-in ballot, make sure you drop it off at an early polling site or at your County Board of Elections Office to ensure it is counted in time. 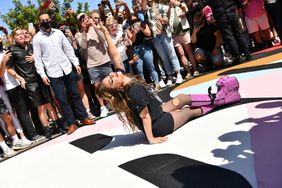