It's truly a blast from the past.

We're calling it: Kylie and Kendall Jenner won Halloween 2020 with the recreation of their coordinating childhood costumes.

On Friday night, Kylie shared a photo of the pair from present-day reproducing a Halloween photo from their tween years. In the original snap, the Jenner sisters are dressed up as go-go dancers, standing side-by-side with matching forced smiles on their faces. Kylie, for her part, wore a sheer baby blue top and flared-leg pants with floral embellishments. She paired the look with a pink bob wig with blunt bangs.

Meanwhile, Kendall opted for a silver sequin skirt, a white camisole with sparkles at the neckline, lace-up boots, and a platinum blonde wig with styling identical to her younger sister's hairpiece.

In the new picture, Kylie and Kendall managed to capture their same awkward expressions, but this time, they posed next to each other in sexy versions of their preteen ensembles. "Mood tonight," Kylie captioned an Instagram Story of the OG photo, before posting the current snapshot.

The day prior to her nostalgic Halloween outing with Kendall, Kylie threw it all the way back to the '90s while serving as the Red Ranger from the Power Rangers in a group costume with her friends. "Go go power rangers," she captioned a video of herself modeling a skintight crop top and leggings, bedazzled sunglasses, and a waist-skimming red wig.

These aren't Kylie's only costumes this year. Earlier this month, the makeup mogul revealed in a cooking clip with her daughter, Stormi Webster, that they are doing a family costume with the 2-year-old's dad, Travis Scott. "You’re going to be the purple Minion and me and daddy are going to be the yellow Minions," Jenner told Stormi at the time. We'll be patiently awaiting the adorable photos. 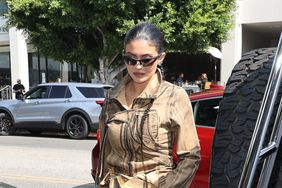