A guide on how to wear your underwear in public.

No longer considered a wardrobe malfunction or faux pas, showing off your underwear in public (and on the red carpet) has quickly become the norm. For years now, people have been flaunting their lingerie underneath sheer skirts and tops, and have even worn corsets as dresses. And in case you thought the trend would be a fleeting moment in fashion history, you thought wrong.

On Saturday, Kristen Stewart proved that naked dressing is still alive and well at the Hamilton Behind the Camera Awards, where she made her matching bra and panty set the best part of her outfit. Wearing a black lace minidress, the actress paired a chic bra and coordinating high-waisted briefs underneath. She accessorized with sexy strappy heels, a metallic smoky eye, and minimal accessories.

Stewart's blonde hair was pulled back into a relaxed updo with a section of waves falling to one side of her face.

During the event, Kristen presented the Director Award to Spencer director, Pablo Larraín. In the film, she portrays the late Princess Diana, and while making the movie, Stewart revealed that she felt "spooky, spiritual" feelings on set. Acknowledging the difficulty of playing someone who has passed away, she admitted, "It's scary to tell a story about someone who's not alive anymore and who already felt so invaded. I never wanted to feel like we were invading anything, just that we were kind of adding to the multiplicity of a beautiful thing."

She continued, "She felt so alive to me when I was making this movie, even if it's all between the ears and it was just a fantasy of mine. But there were moments where my body and mind would forget she was dead. And suddenly, I would just have an image of what happened. And remember who she left behind. And I was amazed by the renewed emotion. Every single time." 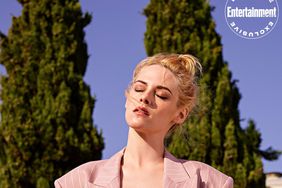