We've reached the DIY tattoo point in the relationship.

Add one more bullet point to Kourtney Kardashian's résumé. The lifestyle guru, reality superstar, mother, and "least-exciting to look at" Kardashian sibling added tattoo artist to her list of achievements. In a new Instagram post, Kardashian shared that she added a new piece to her boyfriend Travis Barker's already impressive collection of tattoos. Since he's running out of space, the new ink went on top of his existing sleeve and reads "I love you."

In her gallery, she shared the process, including what looked like a consultation and sketch to replicate the real tattoo parlor experience, a video of her with the tattoo gun, and the finished project. She's smiling throughout the snapshots, which also showcase Barker's back, scalp, and arm, all completely covered with tattoos.

It's not clear whether the moment was something that the new couple simply did for fun or research for a new feature on Poosh, Kardashian's website.

The new addition is the third tattoo that Barker has reportedly gotten since he and Kardashian started seeing each other. Back in April, Kardashian shared a photo of Barker's chest with "Kourtney" done over some of his older tattoos. That piece appears to be professionally done, as does the first tattoo that Barker shared, a line from 1993's True Romance, one of Kardashian's favorite flicks. It reads "you're so cool" and fans are speculating that it's in Kardashian's handwriting. 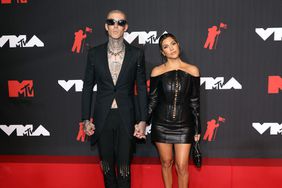 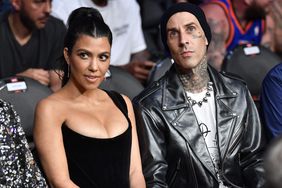