We've officially moved past tattoos and blood to something a Kardashian might hold even dearer than life itself: hair.

In a new Instagram Story, Kourtney Kardashian shared that her beau Travis Barker gave her a trim, something presumably left to the famous family's stable of highly paid and highly qualified professionals.

It may be tough to imagine a pop-punk drummer taking shears to a head of Kardashian hair, but Kourtney's post showed a significant length tossed to the ground, proving that it was a full-on chop and not just a trim.

"haircuts by @travisbarker," Kourtney added to the photo. E! News estimates the length to be at about four inches, which isn't insignificant, even with Kourtney's signature long hair.

Cue Kardashian-Jenner hair guru Jen Atkin either weeping and blocking out a prime spot in her books for some tress triage or commending Kourt on her new look. A friendly reminder to anyone unfamiliar with the smoke, mirrors, wardrobe tape, contour, and highlighter of the Kardashian universe: Kourtney could have very well just have let Barker lop off a section of hair extensions or this may have been part of a wig. There's no way to tell for sure.

The latest move is just one more way the couple is showing the world that they're blazing through relationship milestones. Including the aforementioned tattoos (Kourtney inked Barker and he has her name in his vast collection of body art), they've introduced their kids, had multiple family outings to Disneyland, and even double-dated with another couple du jour, Megan Fox and Machine Gun Kelly.

And if that isn't enough to give the entire world whiplash (or believe in true love again, take your pick), the two have even reportedly spoken about getting married, something fans of Keeping Up With the Kardashians know is an especially big deal for Kourtney.

"Kourtney and Travis have talked about marriage," a source told E! News back on July 13. "It was an instant connection and bond ever since they became romantically involved. They are in it for the long haul. Everyone in the family adores Travis and their families mesh seamlessly. Kourtney is so close with Travis' kids now and vice-versa. They have become a family unit together and it's special." 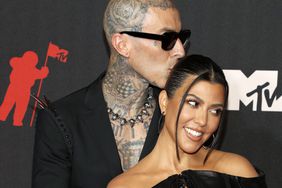 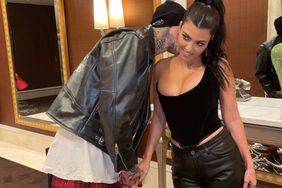