Kobe Bryant's daughter Gianna, known to her father and mother Vanessa as GiGi, has reportedly died in the same crash that killed her father on the morning on Jan. 26. She was 13.

According to TMZ Sports, the father and daughter were on their way to Mamba Academy near Thousand Oaks, California, for basketball practice, when their helicopter crashed in Calabasas, California.

Recently, Gianna had been seen with her father on the sidelines of basketball games for the Lakers. The 13-year-old had apparently started to take after her father's interest in the sport.

Kobe Bryant Has Reportedly Died in a Helicopter Crash in Calabasas

Bryant spoke about their relationship to former NBA players Stephen Jackson Matt Barnes on the podcast All the Smoke. “Before Gigi got into basketball I hardly watched it, but now that’s she’s into basketball, we watch every night,” he told them. “We just had so much fun because it was the first time I was seeing the game through her eyes.”

In another interview on Jimmy Kimmel Live!, Bryant told a story about people coming telling him that he needed to have a boy to carry on his legacy while Gianna was standing right there. He said she looked at them and said, "oh, I've got this – you don't need a boy for that, I got this."

We will update this story as more information comes in. 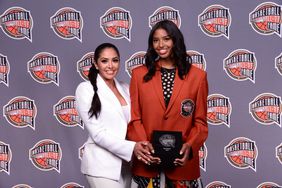