Some things in the BTS universe are undeniable: records are broken like piñatas, Epiphany is a masterpiece, and "who's the guy in the tux with the pink mic?" are the last words someone utters before sliding into a deep, lifelong Kim Seokjin obsession.

There's so much to love about Kim Seokjin, the eldest member of global pop supergroup BTS, I would need a library's worth of texts to accurately capture the spectrum. Obviously, there's his charisma-soaked, stadium-filling talent. There's his endless stock of dad jokes and his deeply relatable love of food (there's no one I'd rather watch eat noodles than you, Eat Jin). There's also his enviable balance: the uber-confident mega-superstar who is always ready to throw himself into a pratfall and be the butt of a joke to make someone laugh. He's the oldest member of BTS, but will embrace his juvenile side and wake everyone up early on vacation by setting off fireworks. The duality of this man.

Oh, and did I mention he's handsome? Worldwide handsome, in fact. Cosmically handsome, actually. Jin's beauty is like one of those mythological Greek heroes too spectacular to forget so their likeness is thrust into the stars so we can forever gaze upon it. Is anyone surprised that even NASA admitted the moon belonged to Seokjin?

As InStyle's resident ARMY, please indulge me as I write this love letter to all his exceptionally beautiful, broad-shouldered, swoon-worthy formalwear moments.

Read on for 7 tuxedo moments from Jin that I would choose over oxygen.

Cause of death: Kim Seokjin.

Performing at the Jingle Ball in Los Angeles, 2019

If this is your first experience with Jin's exposed forehead, remain calm. Take deep breaths. We'll get through this together!

For 2019's 102.7 KIIS FM's Jingle Ball, Bangtan donned white tuxedos brighter than crystal snow and Jin looked like an especially tasty Christmas cookie. His beauty on stage that night was seemingly effortless, unreal, and otherworldly. As if he was a fairytale prince who somehow stumbled into our timeline and decided "might as well give this idol thing a shot."

Attending the Grammys in Los Angeles, 2019

First off: Is this legal?! Can Jin be allowed to roam freely in the world, looking this good?! The charmingly askew bowtie, the several inches of air under those shiny shoes, and yet not a hair out of place — he somehow looks amazing even mid-jump.

After brightening up the red carpet with their signature brand of tumbling-puppy cyclone chaos, Bangtan presented an award on stage for Best R&B Album that year (the first K-pop group to ever present a Grammy in the awards' 60+ year history, by the way) with RM promising the audience: "We'll be back."

And they made good on that promise the very next year …

Performing at the Grammys in Los Angeles, 2020

Bangtan returned to the Grammys in 2020, this time to perform part of a medley of Old Town Road remixes with Lil Nas X and, Jin, wow. The hair. The YSL fit. The proportions. The body rolls. Jin: You should have warned us what you were about to unleash.

And they were just nominated for "Butter" — 2022 Grammys, your move.

While Jin didn't wear a traditional tux to the press conference for their album BE (stream "Life Goes On" for clear skin and good credit!), I'm counting this Prada cashmere cardigan as posh enough to include on the list.

Not to mention that Jin's wire-rimmed glasses are the sartorial equivalent of using a "boyfriend aesthetic" filter in real life. Whenever Jin slips on those glasses and has that soft, fluffy hair, I'm mentally outlining a fanfic that begins with a rom-com style meet-cute.

One more very important thing to note in this pic: How Jin and V leave space and their arms open in between them. For those non-ARMYs that have made it this far through my love letter to Jin, please allow me to explain that gesture and why it's so heart-melting. Bangtan was down one idol while Suga recuperated from shoulder surgery. Jin and V made sure to leave space for his presence, even if he couldn't physically be there. Be right back, swooning over these men who love tender symbolic gestures.

Not many men could pull off a silk peach tux, but then again, not many men are Kim Seokjin.

Because BTS never turns out an understated performance even if it's done remotely, they rented out Seoul's Olympic Stadium (where they had planned to kick off their Map Of The Soul world tour in April 2020 pre-coronavirus) for their fireworks-laden AMAs rendition of "Dynamite". The result? My favorite Jin tuxedo moment, ever. Please, Big Hit: a petition to give whichever genius stylist decided to put Jin in this shimmering, disco-fantasy-fabulous tux a raise.

Oh and, of course, Jin snatched some trophies while at the award show. BTS took home both the Favorite Pop/Rock Group award and the Favorite Social Artist award. Cue those Mic Drop lyrics again...

Appearing at KCon in New Jersey, 2016

You guys! Look at these future Grammy-nominated, #1 Billboard singers!

A rare blonde Jin blessed our existence for the HYYH Era (that's Hwa Yang Yeon Hwa for baby ARMYs, loosely translated to mean the most beautiful time of one's life, the theme of their Youth Trilogy era). This was the first time I had ever seen Jin in a tuxedo and, if I recall correctly, this brief red carpet appearance ended several hundred male models' careers. The Great Model Drought of 2016 began when Jin showed up at KCon.

Lisa From BLACKPINK Is the Style Icon You Should Be Following

Performing at the Billboard Music Awards in Las Vegas, 2019

Yes, Jin looks great here and Halsey is hot and "Boy With Luv" never fails to hit me with a dose of endorphins, but what I really love about Jin's tux in this Billboard Music Awards performance is its color scheme — snow white with black accents and a red rose accessory — evokes an image of Jin's alpaca son RJ. Yup, Jin's cartoon avatar is a sweet, snack-loving alpaca with white fur, black features, and red bandana. 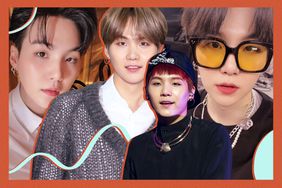 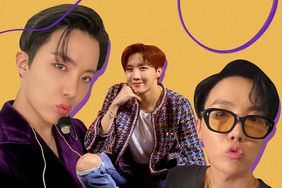