It included driving through the West Coast's most popular fast food chain.

Kim Kardashian and Pete Davidson are just like any normal couple, and their most recent date further proved their relatability.

On Thursday, the two were spotted grabbing lunch at Los Angeles burger joint In-n-Out. The reality star was photographed driving her custom Maybach Sedan (aka a really fancy car) through the drive-thru with the Saturday Night Live star in the passenger seat.

At one point, Kim rolled down her window to retrieve their takeout. It appears they got some soft drinks — or milkshakes — with their burgers. Though their food order cannot be clearly seen in the images obtained by DailyMail, "animal style" and "well-done" fries is really the only way to go. After all, Kim's sister Kylie Jenner went viral for that exact order, which was captured in her 2018 pregnancy video.

The couple's lunchtime date comes after Kim's appearance on The Ellen DeGeneres show, during which she spoke about her relationship to the comedian. The SKIMS founder revealed that Pete had "a few" tattoos dedicated to her, as well as a branding of her name. "This one, the Kim one, isn't a tattoo. It's actually a branding," she explained when DeGeneres showed a snapshot of Davidson's "Kim" tattoo. "He wanted to do something that was really different. First tattoo he got, I was like, 'Oh, so cute. Thank you, oh my God,' you know? Second [tattoo] I'm like, 'Oh, that's so cute,' but that's what tattoo people do, right? They get tattoos of what's going on in their life."

Her personal favorite out of his new collection of ink? "It says, 'My girl is a lawyer,' and that one is really cute," she gushed.

Ellen told her friend that she had really seen a shift in her since the two started dating back in November 2021, to which Kim responded, "It feels good. I think it's just in life, like no matter what it is, I just think I encourage my friends and the people that I love just to be happy. And I went for it. I was like, 'You know what, I'm in my 40s like f–k it, just go for it. Find your happiness.' I went for it and I took my time. I found it and it feels so good. I want to hold on to that forever." 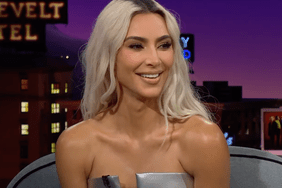