Interlocked fingers and all.

Kim Kardashian and Pete Davidson are officially official. After a private dinner in Staten Island, a friendly handhold on a rollercoaster, and several subsequent weeks of speculation, the two finally confirmed they're a couple with a PDA-filled outing in Palm Springs on Thursday.

In photos exclusively obtained by The Daily Mail, Kim and Pete were spotted holding hands (interlocked fingers, this time) while walking near her mom Kris Jenner's home in the desert, where they celebrated the SNL star's 28th birthday in matching pajamas the day before. For the romantic stroll, Kim dressed casually in a pair of gray sweatpants and a white bodysuit that matched her Yeezy sneakers. She wore no makeup and her hair down and past her waist.

Pete, for his part, wore his pajamas from the night before with a black T-shirt, a blue baseball cap, and colorful kicks with yellow patterned socks.

According to a source at E! News, Kim and Pete are "really happy" and seeing where their romance goes. "Pete has told her he doesn't want to see anyone else," the insider added, noting that Kim apparently feels the same. "She is telling some people they aren't super serious but she isn't seeing anyone else… She's trying to not make a big deal about it but is super into him."

In fact, Kardashian is said to be "smitten" and "giddy" around the comedian. "He makes her laugh the entire time they are together and she is completely enthralled by him," the source continued. 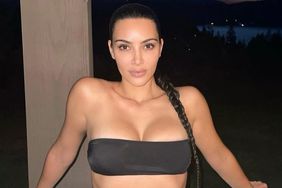