Can we get Kris Jenner on the line, please?

Back in 2020, Kim Kardashian and her entire extended family announced that their long-running E! reality show, Keeping Up with the Kardashians, would be ending with its 20th season. And according to Page Six, the show is planning to go out in a big way — before it heads to Hulu, that is. Late last year, rumors about Kardashian and Kanye West's impending divorce started to make headlines, though additional updates were scarce. Well, that may be by design. Page Six's sources state that the dissolution of Kim and West's marriage and the impending divorce will all get chronicled on KUWTK.

"The Kardashians intend to go out with a bang. They've filmed Kim discussing her marriage problems. But everybody involved is on a nondisclosure agreement, because the finale won't screen until later in 2021," one source said. In its initial reports, Page Six stated that Kardashian had enlisted celebrity divorce attorney Laura Wasser, who maybe sort-of inspired Laura Dern's role in Marriage Story.

Another source states that West has finally gotten fed up with the family, namely Kris Jenner. And it's been a long time coming.

"He understands Kim's side has to spin that she is sick of him," another source added. "In reality, he's been sick of being involved with [the] Kardashians for a long while. Especially her mother, who looms large in all big decisions she makes. [West] seems to be enjoying the brouhaha surrounding his divorce. He is quite familiar with what the Kardashian public relations machine is capable of, and thinks it's funny that her team is blaming his presidential run on the marriage disintegration."

The paper explains that currently, the two are finalizing a way to split their properties.

"Kim is trying to get Kanye to turn over the Calabasas house to her," a source said. "She owns all the land and adjoining lots around the house but Kanye owns the actual house." 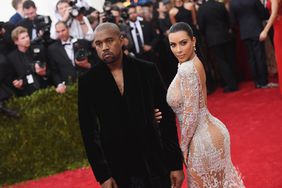 Kim Kardashian and Kanye West Are Reportedly "No Longer Speaking"