Hours before Kourtney Kardashian's Italian wedding to Travis Barker, her sister Kim was spotted grabbing ice cream (excuse me, gelato) with her daughter North and niece Penelope on the cobblestoned streets of Portofino. And while one may have expected her to be dressed down for the low-key outing — since she would presumably be getting glammed right before the big event anyway — Kim did the exact opposite.

Living la dolce vita, Kim paired her vanilla cone with a gray corset and matching lingerie-inspired pants. Her skintight trousers featured an all-over floral pattern, save for a panel of solid fabric by the crotch area that mimicked the appearance of underwear. She accessorized with silver, see-through heels, a giant cross necklace, and reflective sunglasses. Kim's new platinum blonde hair was worn up in a tousled bun with two face-framing sections.

Kravis's wedding festivities kicked off on Friday with a dinner party at Ristorante Punyin, which was followed by lunch and downtime on a yacht the next day. When asked about her favorite part of the weekend so far, Kim told People, "Every part! It was all amazing!"

Today will be the big finale, with Kourtney and Travis getting married alongside their close friends and family at Castello Brown, a 16th-century castle in Portofino. And while the ceremony will technically be the third for the couple (they had a "practice wedding" in Vegas last month and tied the knot at a courthouse in Santa Barbara a week ago), the two are also reportedly planning a fourth celebration in Los Angeles. 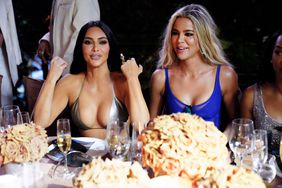