Family bonding, but make it a photoshoot.

Kim Kardashian is proving once again that there's no bad blood between her and ex-husband Kanye West — but this time, she did it in the most fashionable way. On Thursday, the mother-of-four shared a behind-the-scenes photo dump of a futuristic-themed photoshoot for Kanye's clothing brand, Yeezy, and both of their daughters got in on the action, too.

Of course, Kim's oldest daughter, North West, couldn't be excluded from the family affair, but she skipped the group selfie in favor of a solo shot (duh!). In the snap, North showed off a similar outfit to Chi's and wore her natural curls parted down the middle. All three girls accessorized the mommy-and-me matching moment with the exact same pair of bug-eye reflective Yeezy sunglasses in the photos, which call to mind the Balenciaga styles Kim has been wearing everywhere this summer.

Kim's supportive post comes shortly after a source told Us Weekly that she and Kanye, who also share sons Saint and Psalm, have started to master co-parenting. "Kim and Kanye have been co-parenting very well as of late," the source shared. "They are very civil with each other and right now, there are no issues. They are both treating each other with mutual respect." 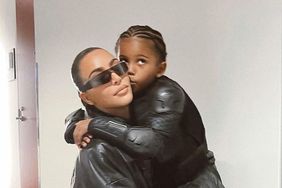