Kim is my lawyer.

Kim Kardashian is flexing her legal knowledge in a clip from Hillary and Chelsea Clinton's new Apple TV+ docu-series, Gutsy. In a video obtained by People, Kardashian and the former secretary of state face off in a quiz putting their expertise in law to the test.

Prior to the start of the game, Hillary quiped that Kardashian may have a leg up in this competition, to which Chelsea replied, "Kim has studied more recently than you." The reality star just passed the baby bar exam late last year, after all.

Chelsea, who acted as the official quizzer, first asked a question about the use of deadly force. Kardashian buzzed in quickly before expertly answering the inquiry. After a few more rounds of queries, we see Kardashian beat Clinton by a landslide of 11-4.

The former presidential candidate later told the publication that it was quite the humbling it experience. "Oh, it was heartbreaking!" she said. Chelsea chirped that her mom needed to more so work on her reaction time in hitting the button. "Sometimes I could see my mom knew what the answer was, but she wouldn't hit the buzzer in time," Chelsea said.

"Well I was also really intrigued by how well she did!" Hillary added. "I wanted to put the spotlight on her — not that she needs it. But she worked really hard." 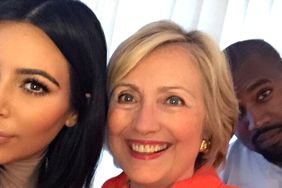