"I was always chasing some fad."

Fans that have managed to keep up with the Kardashians for more than 20 seasons know that Khloé Kardashian has struggled with body image — and she's been upfront about it (which is true about nearly everything when it comes to no-nonsense Khloé).

In a new interview with Health, she opened up about her struggles with emotional eating and how she's settled into her fitness routine, encouraging people to treat getting healthy more like a lifestyle and not a temporary change with the expectation of massive results.

"I've actually always had a really unhealthy relationship with food," she said. "When I was younger and was sad, I would eat — I was an emotional eater. And then I hated the way I felt after that. I was almost punishing myself for binging or having a bag of chips — it just became so much thought."

And like many people growing up in the time of South Beach diets and viral fasting, Kardashian tried it all, only to find out that those sort of fad diets weren't what she needed to do to be happy and healthy.

"I had tried every diet under the sun," she added. "Remember when Beyoncé did that lemon juice and cayenne pepper thing? I was like, sign me up! That's why I yo-yoed my entire life — I was always chasing some fad."

She went on to say that instead of going all-in on a trendy diet, she slowly incorporated new things to see how they'd affect her. Slowly, she explains, she found things that worked and, eventually, those things just became part of her everyday life.

"When I started working out, I decided to make some lifestyle changes. So I'd say, for example, this week I am just going to do one thing — I'm just going to cut out sugar. Then, maybe I'd try to do it for a month. After that, I'd try to incorporate another healthy change," Kardashian continued. "It's about practicing healthy habits on a daily basis. I have to think of it as a lifestyle rather than thinking I want to try this diet or some other thing someone was talking about. I'm so over that stage in my life."

Most importantly, she doesn't ever deprive herself of the things that make her feel great, whether it's "healthy" or not, like pizza.

"I worked so hard in the gym for this," she wrote on Instagram to celebrate her cover. "And I celebrated with pizza (my weakness) right afterwards 😋."

8 Ways to Get a Killer Beach Body, Inspired by Khloé Kardashian
I Tried Acupuncture to Get Over a Breakup — And It Actually Worked 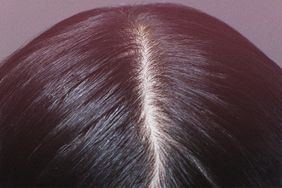 Is Your Scalp Actually Healthy? Experts Explain How to Know For Sure