She understood the assignment.

The Kardashian-Jenners have officially touched down in Italy for Kourtney's wedding weekend, and, while they all adhered to the gothic-glam dress code, no one nailed the theme better than Kendall Jenner and her very Cruel Intentions-inspired outfit.

On Friday, the model stepped out for her big sister's pre-wedding dinner at Ristorante Punyin in Portofino, wearing a black corset teamed with a sheer skirt that showed off her matching underwear and a choker necklace with a bedazzled red cross dangling from a black ribbon. The whole look was discreetly chic just like Kathryn Merteuil from the '90s cult-classic film. Kendall's peep-toe slides, however, were less teenage prep-schooler and more fancy grandma. She wore her brunette hair down, straight, and with a middle part.

Jenner was joined by her boyfriend Devin Booker for the festivities, and they coordinated outfits, with the NBA player also wearing all-black.

This weekend, Kourtney and Travis Barker are reportedly having a third wedding at Castello Brown, a 16th-century castle in Italy. The two unofficially tied the knot during a "practice" ceremony in Las Vegas after the Grammys last month, and then again, at a courthouse in Santa Barbara less than a week ago. This time, though, is reportedly the final celebration for the couple.

"You can feel all the love," a source said of the kick-off dinner in Portofino. "Everyone is very excited to celebrate Kourtney and Travis." 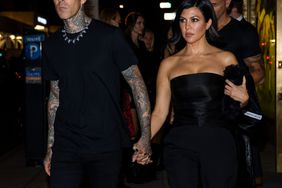