Have they been planning this the whole time?

The similarities between Katy Perry and Zooey Deschanel have been *a thing* on the internet for over a decade at this point. The two have even gotten in on the jokes about them being twins several times throughout the years, taking photos together at events, and even opening up in interviews about one another. In 2011, Deschanel told New York Magazine, "It’s a strange relationship to have with somebody. I probably answer more questions about her than about my own family.”

This week, however, the friends beat us all to the punchline of the aforementioned joke with a new video for Perry's single "Not the End of the World."

The video stars Deschanel, who gets mistakenly abducted by aliens who think she is Perry. It ends with her leaning all the way into the mistake ... after saving the earth by turning off the internet? .... and dressing in a very Katy Perry style costume for a performance.

Just last week, Perry reminded fans of the look that originated the comparisons with Deschanel when she brought back her signature bangs and dark hair.

Next up: Perry needs to star in an indie rom-com alongside Joseph Gordon Levitt. I'll be waiting. 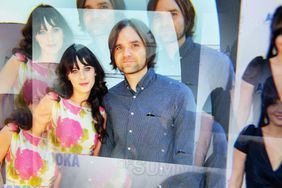 Thierry Mugler Is Everywhere You Look
It's Been 10 Years Since Rebecca Black Released "Friday," and the Internet's No Kinder to Young Girls