The singer wore the LBD while dodging comments about an ex-flame.

Katy Perry may have endured an awkward moment with a contestant during this week's episode of American Idol, but at least she looked good while doing it.

On Monday, Katy wore a floor-skimming, long-sleeved black dress while judging the contest's top 11 performances. Elevating the look of an average LBD, the pop star's gown was littered with cutouts up the chest and across the waist. Circular gold disks kept the dress from splitting in two and connected the long skirt to the outfit's bodice. Katy finished her look by accessorizing with chunky oversized hoops and simple black heels. The singer wore her hair slicked into a sleek low bun with a middle part.

While Katy's outfit certainly stunned, her dress wasn't the only noteworthy moment of the evening. For this week's challenge, each contestant was tasked with performing a song selected by one of the judges before guessing which judge — Perry, Lionel Richie, or Luke Bryan — had picked it. 20-year-old singer Noah Thompson sang John Mayer's 2009 hit "Heartbreak Warfare" for his performance and guessed that Katy (who dated Mayer off and on for two years in the early 2010s) was the judge behind the song's selection.

The pop star looked shocked by the prediction and joked, "Noah ... I feel like maybe you should Wikipedia me." She went on to add, "It's all a great song, you did great, but I can't talk anymore," before shaking her head and teasingly crawling under the judge's table. Katy finished the bit surrounding her ex-boyfriend by quipping, "Who's going to pay for my extra hour of therapy?"

Katy and John may have called it quits in 2015, but the breakup ultimately allowed her to meet her now-fiancé and baby daddy, actor Orlando Bloom, in 2016. Through a series of breakups and makeups, the two got engaged in February 2019 before welcoming their daughter, Daisy, in August 2020. 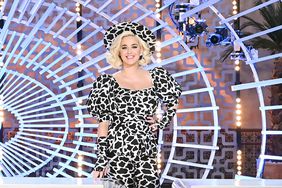