No Orlando Bloom, no problem.

Proving that past relationships don't have to brew bad blood, Katy Perry and Miranda Kerr had a very relaxing and rejuvenating day together — and even got a sweet comment from Orlando Bloom in the process. Perry posted a few clips to her Instagram feed showing herself attending a yoga class and spa day with Kerr for her brand, KORA Organics. The two were all smiles as they showed off a post-workout glow, though it may have had something to do with facial spray, since Perry noted that she spent a lot of her time in Shavasana, since it was her very first session post-Daisy Dove.

"Spent me #wellnesswednesday with my gal @mirandakerr and @koraorganics for the very fresh & soothing #mintymineralhydrationmist launch!" Perry wrote alongside her photos and videos. "First time I did yoga since being preggers ... let's just say I enjoyed shavasana okkkk."

Bloom commented with a pun and proved that the trio are getting along just fine, "You two are the cutest, I mist all the fun."

Kerr also posted the clips, adding "I love you" to her Story.

Bloom and Kerr were married from 2010 to 2013. The two share a son, Flynn. In 2017, Kerr married Evan Spiegel and the two have two sons, Hart and Myles. After an on-again, off-again relationship that started in 2016, Bloom and Perry got engaged last year and recently welcomed a daughter, Daisy Dove.

Kerr has spoken about her close relationship with Perry. In November 2020, she told Drew Barrymore that she's happy for Bloom and Perry during an appearance on Barrymore's talk show.

"I adore Katy, and I just feel so happy that Orlando has found someone that makes his heart so happy, because at the end of the day, for Flynn to have a happy father and a happy mother is just the most important thing," Kerr said. "I'm just so grateful that Orlando and Katy found each other, and I'm so grateful that I found my incredible husband [Evan Spiegel] and just that we all really respect each other." 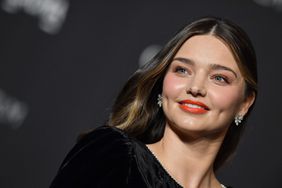