It was the NFL Honors, after all.

Katy Perry is no stranger to committing to a theme (see "left shark" at the 2015 Super Bowl). And she continued to bring her iconic, campy fashion sense to the sidelines at the 2022 NFL Honors, where she presented an award ahead of Super Bowl LVII on Sunday.

For the ceremony on Thursday night, the pop star opted for a sporty ensemble that included a dark brown strapless ruched dress that she paired with matching opera gloves. Even her purse was on-brand for the evening, as she carried a rhinestone Judith Leiber football clutch that fit in the palm of her hand. She accessorized with massive silver hoops and a two-stone diamond ring worn over her gloves.

For her glam, the singer matched her look with bronzed smoky eye makeup, which was accompanied by winged liner and dramatic false lashes. Her jet black tresses were slicked back off her face and styled to look wet.

"damn should I retire #NFLHonors 🏈," Perry wrote alongside a series of selfies showing off the outfit.

At the event, Katy presented the award for Defensive Player Of The Year, alongside NFL star JJ Watt. And the honor went to JJ's brother TJ Watt from the Pittsburgh Steelers. The Arizona Cardinal shared the sweet sibling moment to Twitter. When JJ announced the winner was his brother, Katy showed her enthusiasm by high-fiving the pro. 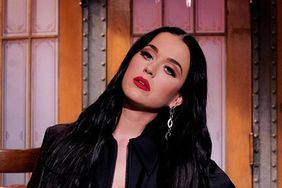 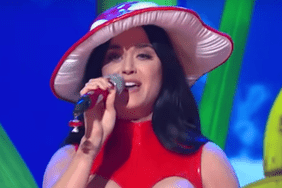