You'll still have to look closely to spot it.

Back in the summer of 2021, Katie Holmes surprised everyone when she stepped out with a tiny nose ring. At the time, she embraced the throwback '90s piercing and had a tiny stud, but today, she swapped out the subtle piece of jewelry for a bigger, more noticeable ring, which she paired with a butterfly-print dress from Kate Spade New York (officially, it's the spring flight lawn dress).

Before the change, Holmes wore a diamond stud, according to the Daily Mail. The bit of bling was present and accounted for when Holmes attended RiseNY's grand opening celebration in New York City on March 2 and the Ulla Johnson presentation during New York Fashion Week back on March 13. The same tiny stud made an appearance in a selfie back in July 2021. It appears that today is the first time that Holmes has shown off something a little bit more attention-grabbing.

Holmes is set to return to the screen with two projects. She recently wrapped up a TV movie for Fox, where she'll play an FBI special agent, and is currently working on Rare Objects, which she co-wrote with the novel's author, Kathleen Tessaro. She's also directing the film.

And away from the spotlight, Holmes has been keeping busy with her daughter, Suri Cruise, who turns 16 this year. The mother-daughter duo has been spotted together (and solo) in NYC. Suri was recently photographed embracing another '90s staple: bellbottoms. 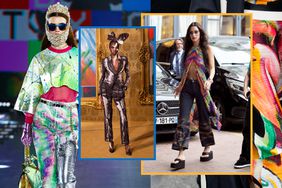 Is Splatter Paint the New Tie-Dye?