If only for the summer.

After news broke that Queen Elizabeth would be shifting her home base from Kensington Palace to Windsor Castle, nobody was quite sure what that meant for the rest of the royal family. With so many things going virtual, it wasn't really a surprise that the queen figured that she could perform most of her duties via video. Well, new reports claim that Kate Middleton and Prince William could be joining her majesty out in Windsor for the summer, moving even more royals away from London.

The Sun reports that the Cambridges are looking at private homes at the moment and won't be taking any of the apartments at Winsor Castle or any royal residences, such as Fort Belvedere or Frogmore House. And because where Will and Kate go, Louis, Charlotte, and George follow, the outlet notes that schools are also being looked at, specifically in Buckinghamshire and Surrey.

"I think there are a number of reasons why they would want to make such a move, and absolutely proximity to the queen is one of them," royal expert Jonathan Sacerdoti told Express back in November.

"She's had a pretty tough year, including losing Prince Philip, and one doesn't picture the queen alone ... She's definitely going to be feeling a sense of solitude related to losing her husband, something that many people will be familiar with," he added. "If William and Kate move to be closer to her, that could certainly help in that respect, and indeed [to have] children there."

Currently, Kate and William divide their time between Kensington Palace and Anmer Hall in Norfolk. Marie Claire adds that the commute between Windsor and London is quicker and easier than one from other places the royals have been rumored to move to, such as Berkshire, where Kate grew up. 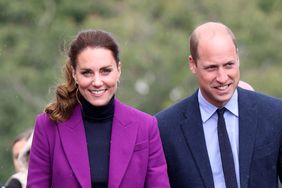