Sources add that it's brought Kate and Prince William closer than ever.

After Prince Harry and Meghan Markle stepped away from their roles as senior members of the royal family, it's reportedly caused a rift between the Sussexes and their siblings, Prince William and Kate Middleton. According to new reports, new responsibilities for the Cambridges came with Harry and Meghan's departure and although Prince Charles and Camilla Parker Bowles have stepped up to take some of the royal duties away, Kate has been overwhelmed by the situation.

Kate has been "really, really upset about it all," a royal insider told People. It's not just the appearances filling up her schedule that are giving Kate grief. Reports of racism within the royal family, including concerns about Archie's skin color, and accusations involving the mistreatment of staffers probably didn't help with Kate keeping her cool.

However, the rift has made Kate and William stronger, especially as the two connected over the situation with William and Harry, who had previously been very, very close.

"Everything with Harry and Meghan has been hugely stressful, but if anything, it's pulled [her and William] closer together," another source adds. "She was upset about it because [William] was so upset. Seeing her husband so distraught was tough."

Earlier this month, Kate brushed off a question about Harry and Meghan during an appearance, People adds. Her friends insist that she's not going to let anyone manipulate the situation into more than it is.

"She's no pushover. She has an inner strength for sure," they told People. "With so much of what she does making headlines, Kate is laser-focused on making sure that she commits time to herself and her family as well as her role as Duchess of Cambridge — and her pals can tell, saying that she's "more and more impressive as time goes on. She is a focused and professional woman." 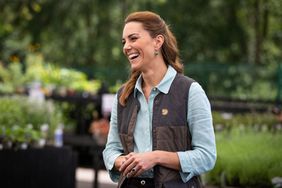