The duchess is replacing Prince Harry as the royal patron of rugby.

Kate Middleton is a multifaceted duchess. So for her latest public appearance, she traded in her monochromatic outfits and pointy-toed heels for a ... track suit. Kate just replaced Prince Harry as the Royal Patron of the Rugby Football League and England Rugby, and for her first order of duty, she's showing off her skills.

On Wednesday, the duchess proved she'd be a hands-on patron when she joined England rugby stars at Twickenham Stadium for a fun training session. Kate stepped onto the pitch in a black training sweatsuit that consisted of a quarter-zip pullover and matching pants, both embroidered with a red rose, the union's logo.

Instead of her signature pumps, Kate wore cleats, and the duchess' curled tresses were pulled off her face into a ponytail. She demonstrated good sportsmanship as she practiced multiple drills and was even hoisted into the air by players to catch a ball, captured in videos tweeted out by royal editor Emily Nash.

Kate announced her new role with a cute video where she passed the rugby ball to other players. At one point in the video, the duchess showed off her impressive ability to twirl the ball on one finger.

"I am so thrilled to become Patron of the Rugby Football League and Rugby Football Union — two fantastic organisations who are committed to harnessing the power that sport can have in bringing communities together and helping individuals flourish," she wrote alongside the montage. "I look forward to working with them across all levels of the games, and to cheering England on in what promises to be an exciting year for both sports!"

The partnership comes after former patron Prince Harry relinquished his royal duties and patronages when he and Meghan Markle stepped down as senior members of the family. Harry is still involved in some of those charities and organizations as a private patron. 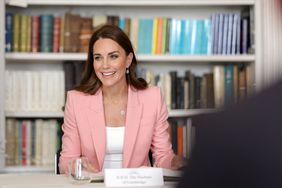