A tried and true combination.

This morning, Kate Middleton and her signature workwear style arrived ready for royal duty. For a joint appearance with her husband, Prince William, at the headquarters of the Disaster Emergency Committee in London in support of Ukraine on Thursday, the duchess wore her go-to outfit formula that seemingly never fails.

Dressed in tried and true tailored separates, Kate slipped on a beige double-breasted blazer with a pin featuring the Ukrainian flag's colors fastened to the lapel of her jacket, an ivory T-shirt was worn underneath, and a pair of skinny black pants topped things off. She teamed the look with classic pointed-toe black pumps, and other royal signifiers, including her bouncy blow-dry, citrine pear drop earrings, and sapphire engagement ring.

William also played it safe style-wise in a navy suit and light blue dress shirt underneath.

During the couple's visit, they learned more about the humanitarian crisis in Ukraine first-hand, speaking with aid workers of the Disaster Emergency Committee who are helping with relief efforts on the ground. The DEC and its charities are currently providing food, water, shelter and medical assistance to the people of Ukraine.

The Duke and Duchess of Cambridge's latest outing just so happened to fall on the Queen's 96th birthday. Ahead of their appearance, they made sure to wish the monarchy a happy birthday on Instagram. "Wishing Her Majesty The Queen a very happy 96th birthday today," the couple wrote alongside two photos of the Queen (one of which was a family portrait of Her Majesty and Prince Philip with their great-grandchildren), adding: "An inspiration to so many across the UK, the Commonwealth and the world, it's particularly special to be celebrating in this #PlatinumJubilee year." 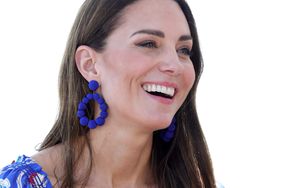 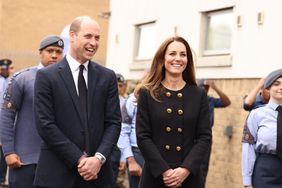