After an eventful Trooping the Colour carriage ride (to say the least) during the Queen's Platinum Jubilee, Kate Middleton and Prince William were back to carriage processionals while making their 2022 Royal Ascot debut on Friday.

The Duke and Duchess of Cambridge led the royal family's commute to the annual horse race alongside William and Violet Vestey. Kate wore a mock-neck, long-sleeved Alessandra Rich white gown for the occasion, which featured brown polka dots, a mid-calf length, and a cinched waist. She accessorized the look with a matching brown wide-brimmed fascinator with white floral detailing, brown heels, and pearl drop earrings. Kate wore her hair in a low bun and finished the look with a bright pink lip.

Prince William sported a black top hat and a matching tailcoat for the outing, complete with a blue tie and a white undershirt, pocket square, and flower-shaped lapel pin. Though he started with his jacket on, men were later permitted to remove coats and ties amid sweltering temperatures.

The couple's public appearance comes just days after news broke that the Cambridges will soon be moving into the four-bedroom Adelaide Cottage this summer. But, as it turns out, they're not the only ones who wanted to call the modest abode their home. As The Sun notes, a source told Daily Mail back in 2018 that Prince Harry and Meghan Markle were originally gifted the home.

"The Queen has offered the Grade II listed property to the newlyweds as a gift," a source revealed at the time. "The couple had been for a viewing, liked it, and will move in soon."

While the Duke and Duchess of Sussex ended up choosing to live at Frogmore Cottage instead before moving to North America, a source told The Sun that Adelaide Cottage ticks many of Kate and William's boxes.

"Kate and William were very keen for a modest home to start their new lives in Windsor," a source said. "Adelaide Cottage fits the bill because it is a four-bedroom home and they do not need any more as they have no live-in staff. They were adamant they didn't want anything too showy or anything that needed renovating or extra security so as not to be a burden on the taxpayer." 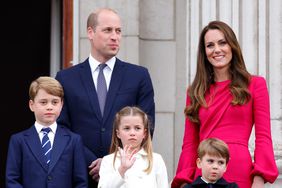