Once upon a time, there was a girl named Catherine who met a prince and, believe it or not, they really did get a happily ever after. Not only is that the plot of just about every Disney princess movie, it's what happened with real-life princess Kate Middleton and her Prince Charming, Prince William. Back before they became two of the most-photographed people on the face of the planet, before that royal wedding, and even before all those very good coats, they were just two kids at school — one just happened to be the future king of England.

Here's everything you need to know, from a surprise fashion show strut in a sheer dress to three royal heirs.

Like some of your best friends, Kate and William met during their first year of college. They both attended the University of St. Andrews in Scotland and actually lived in the same residence hall, St. Salvator's. Choosing St. Andrews was part of William's quest to be an ordinary boy in the eyes of the world, not a boy set to be the future king of England.

"I want to go there and be an ordinary student. I mean, I'm only going to university," William said in a BBC interview in 2001. "It's not like I'm getting married — though that's what it feels like sometimes. It will get easier as time goes on. Everyone will get bored of me, which they do."

In 2002, Kate walked in a fashion show wearing a sheer dress, something that many see as the moment that sparked a romance between the friends. William reportedly paid $275 to score a front row seat at the Don't Walk show on March 27, 2002 and as she made her way down the catwalk at the St. Andrews Bay Hotel, William apparently turned to his friend Fergus Boyd and whispered, "Wow, Fergus, Kate's hot!"

Later, William said that he knew that Kate was special as soon as he met her, but also said that they were friends before they went out for the first time, giving anyone in the friend zone a little bit of hope. It wasn't until 2003 that they became an official couple and that came after they moved out of the residence halls and into a house together with two other roommates.

"When I first met Kate, I knew there was something very special about her. I knew there was possibly something that I wanted to explore there," he said in an interview with ABC. "We ended up being friends for a while, and that just sort of was a good foundation. Because I do generally believe now that being friends with one another is a massive advantage. And it just went from there."

"I actually think I went bright red when I met you and sort of scuttled off, feeling very shy," Kate shared. "But we did become very close friends from quite early."

In 2004, the two go on a ski trip together, giving the public the very first peek at the pair as a couple.

Kate and William continue to date after their respective graduations.

"I just want to say a big thank you to everyone who has made my time here so enjoyable. I have been able to lead as 'normal' a student life as I could have hoped for and I'm very grateful to everyone, particularly the locals, who have helped make this happen," William said before the ceremony, according to the Telegraph.

In subsequent interviews, Kate explained that Will tried to show off his skills in the kitchen, but his efforts often fell flat.

"He did cook for me quite a bit at university, and he would always come with a bit of angst and a bit of anger if something had gone wrong, and I would have to wander in and save something that was going," she shared.

"We moved in together as friends because we were living together, we lived with a couple of others as well, and it just sort of blossomed from there really," William added. "We just saw more of each other, and you know, hung out a bit more and did stuff."

It wasn't all smooth sailing. Reports of a breakup circulated as William finished his military training and Kate worked in London.

"Well, I think to be honest, I wouldn't believe everything you read in the paper, but in that particular instance we did split up for a bit," William would tell Tom Bradby after the two announced their engagement. "But that was just, we both were very young, it was at university, we were sort of both finding ourselves as such and being different characters and stuff. It was very much trying to find our own way and we were growing up, and so it was just sort of a bit of space and a bit of things like that, and it worked out for the better."

Kate said that the time apart was good for them.

"And I think I at the time wasn't very happy about it, but actually it made me a stronger person, you find out things about yourself that maybe you hadn't realized," she said. "I think you can get quite consumed by a relationship when you are younger, and I really valued that time for me as well although I didn't think it at the time. Looking back on it."

When the two appeared together at the Concert for Diana at Wembley Stadium, which commemorated the 10th anniversary of Princess Diana's passing, royal watchers let out a sigh of relief knowing their golden couple was back together.

Kate celebrates a major milestone with William: he received his wings from the Royal Air Force. At the ceremony, Kate was photographed alongside William. After, the two attended a private reception with Prince Charles and the Duchess of Cornwall and the merry royal (and royal-to-be) gang joined other RAF Cranwell graduates for lunch, the Telegraph reports.

"It's my mother's engagement ring," William explained. "So I thought it was quite nice because obviously she's not going to be around to share any of the fun and excitement of it all — this was my way of keeping her sort of close to it all."

William also shared more about the actual proposal, saying that it happened on a trip to Kenya.

"It was about three weeks ago on holiday in Kenya," he said. "We had a little private time away together with some friends, and I just decided that it was the right time really. We had been talking about marriage for a while so it wasn't a massively big surprise. I took her up somewhere nice in Kenya and I proposed."

First comes love, then comes marriage. And this specific marriage happened to be one of the most-watched weddings of all time. Kate famously wore an Alexander McQueen gown, William was in full military regalia (specifically an Irish Guards Mounted Officer's uniform), and celebrities like Sir Elton John, David and Victoria Beckham, Guy Ritchie, and Joss Stone were on the guest list. Before the ceremony, the queen bequeaths William the title of Duke of Cambridge. That officially makes Kate the Duchess of Cambridge. Queen Elizabeth even loaned Kate the Cartier Scroll Tiara for the big day.

Later that year, the two of them embark on their first royal tour. It marks Kate's first trip to North America and the two visit Canada and America. They famously meet American royal Jennifer Lopez.

The two attend various events at the 2012 Olympics in London to cheer on British athletes and provide the world with more photos of them in sportswear. In December, the two announce that they're expecting their first child together.

Kate and Prince William announce the arrival of their first child, Prince George. He was born in the Lindo Wing of St. Mary's Hospital in London and becomes third in the line of succession to the English throne.

Kate and William take George along with them on their second royal tour. This time, the itinerary takes them to New Zealand and Australia. In September, there's more baby news: the couple's second child is on the way.

Princess Charlotte is born at St. Mary's Hospital in London. She has the honor of getting an Instagram announcement from the royal family. She's the first princess born into the family in 25 years and Kate and William would go on to christen her at the Church of St. Mary Magdalene at Sandringham just a few weeks later.

After a few years away from the spotlight, Kate and William take center stage after Prince Harry and his wife, Meghan Markle, announce that they would be stepping down from their duties as senior members of the royal family.

Rumors start to surface about Kate freaking out, but she seems to handle things well and is supposedly happier to "have a more prominent voice in royal charity work." That includes plenty of video calls during the coronavirus lockdown.

A source told Us Weekly that Harry and Meghan's decition brought the Cambridges "closer together."

"I recently visited Cambridge for the first time in my life," Floyd said of the surprise assignment. "That same day, by an astonishing coincidence, was also the day I was asked to photograph the Duke and Duchess of Cambridge for their 10th wedding anniversary."

Kate and William also pay a visit to their old college stomping grounds.

"It was here in Scotland — 20 years ago this year — that I first met Catherine," William said during an appearance at The Church of Scotland. "Needless to say, the town where you meet your future wife holds a very special place in your heart." 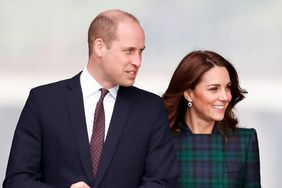