And shared some flirty banter.

On Wednesday, the Irish Foreign Ministry released a clip of world leaders honoring the holiday, including the Duke and Duchess of Cambridge as well as President Joe Biden and Canadian Prime Minister Justin Trudeau.

Prince William shared a message in the traditional Irish language, to which Kate added, "We're delighted to wish you all a very Happy St. Patrick's Day!"

"How come you got that easy bit?" he joked.

The couple also shared memories from their last trip to Ireland, which took place in early March last year just days before the world locked down amid the COVID-19 pandemic.

"We were so thrilled to be able to visit Ireland just over a year ago, a few short weeks before all of our lives were turned upside-down by the pandemic," Prince William said.

"The warm welcome that we received everywhere was a testament to the friendship between our two countries and the strength of the relationship between the U.K. and Ireland," Kate shared.

This marks the couple's second public appearance together following Prince Harry and Meghan Markle's interview with Oprah. William previously responded to a reporter's question about the interview, saying, "We're very much not a racist family."

At the time, the duke said he and his brother had not spoken following the interview, but this week, Gayle King revealed she had spoken to the Sussexes and could confirm Harry and William have now spoken.

"Well I'm not trying to break news, but I did actually call them to see how they were feeling, and it's true, Harry has talked to his brother and he has talked to his father too," King said. "The word I was given was that those conversations were not productive. But they are glad that they have at least started a conversation." 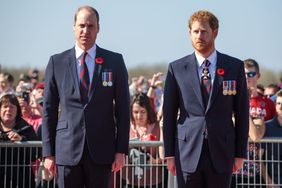