Today marks a major moment in Wimbledon history — Prince George, the future king, made his debut appearance at the annual British tennis tournament alongside his mom, Kate Middleton, and dad, Prince William, during the 2022 men's singles championship.

The 8-year-old followed his parents's lead and dressed up for the occasion, twinning not only with Will in a mini suit, but also color-coordinating with Kate. Spotted in the stands (er, the Royal Box), Kate wore a navy blue skirt and matching top by Alessandra Rich in her go-to polka-dot print. The separates featured a ruffled neckline, puff sleeves, and pearl buttons down the front. She accessorized with sapphire drop earrings and a necklace that matched her engagement ring.

George twinned with his mom in a dark blue suit with a white button-down and striped tie underneath. Meanwhile, Will also wore a suit and tie — albeit in a lighter shade of blue.

Before making their way to their seats to witness the match between Novak Djokovic and Nick Kyrgios, the Cambridges met with Wimbledon officials, and George adorably shook their hands. The young royal has taken after his mom in terms of her love for tennis, and has even received lessons from 20-time Grand Slam champion Roger Federer.

When asked about George's skills on the court, Ferderer explained, "At that stage, it's all about just touching the ball, it's already good." He added that he loves to see that George is into the game like his mother, and hopes he will "still say the same in a few years' time." 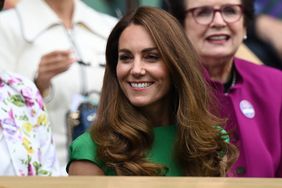