Theroyal family got together, along with other world leaders including President Joe Biden, at the G7 summit in Cornwall, and Kate Middleton greeted Prince Charles with a cute moniker.

According to a lipreader, when the Duchess of Cambridge arrived, she said "Hello, Grandpa. How are you?" to her father-in-law. The nickname makes a lot of sense, since Prince Charles is "Grandpa" to Kate and Prince William's three kids George, Charlotte, and Louis.

Kate, Prince Charles, Prince William, Camilla, the Duchess of Cornwall, and Queen Elizabeth all congregated and conversed outside of the reception before heading in together. The lipreader also suggested to CornwallLive that there was a sweet exchange between Camila and the queen. Camilla carried Queen Elizabeth's shawl, and at one point she asked the queen if she wanted to wear it. Queen Elizabeth allegedly responded, "You have it."

During the event the royals mingled with some of the other world leaders, which included German Chancellor Angela Merkel and U.S. President Joe Biden. President Biden and his wife, first lady Dr. Jill Biden, spent some time with the royals last week during their trip to England. Dr. Jill Biden and Kate actually visited an elementary school together 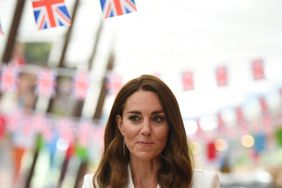