Kate Middleton's three children are always close to her heart.

During an outing in London this week, the Duchess of Cambridge wore a necklace engraved with the initials of Prince George, Princess Charlotte and Prince Louis. The gold chainlink necklace, which featured three dangling charms engraved with the letters "C", "G," and "L," was a subtle but sweet dedication to her children.

While speaking with families, the duchess reportedly told one of the fellow moms that she would have brought two-year-old Prince Louis along, but joked he would have made too much of a fuss.

"She didn’t bring Louis along as there was a fountain where we met, and he would have been in the fountain, splashing around making a big racket," the mother told The Sun.

This wasn't the only time Middleton wore the necklace in recent weeks. During a with University Students to talk about mental health during the Covid-19 crisis, the duchess once again sported the tribute to her children.

The necklace is currently out of stock but is reportedly from All the Falling Stars. 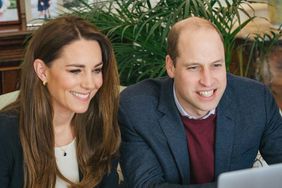 Kate Middleton Wore a Meaningful Necklace During Her Latest Appearance