She stepped out in a spring-ready ensemble for an outing in London.

On Thursday, she and Prince William stepped out for an engagement at a school in East London to speak with teachers and students. The Duchess of Cambridge wore a pink coat from Max & Co. with a matching pink sweater from Boden, paired with wide-legged black trousers from Jigsaw. She wore her hair in a simple ponytail and accessorized with a black clutch and her favorite floral face mask.

During the event, she did not stop to speak with reporters, though Prince William responded to a question about Harry and Meghan's interview.

When asked by a reporter if the family was racist, he replied, "We're very much not a racist family." The reporter also asked the Duke of Cambridge if he had spoken to his brother following the interview, which aired Monday night in the U.K. Prince William replied, "I haven't spoken to him yet but I will do."

On Tuesday, Buckingham Palace issued a statement about the interview, which read, "The whole family is saddened to learn the full extent of how challenging the last few years have been for Harry and Meghan. The issues raised, particularly that of race, are concerning. While some recollections may vary, they are taken very seriously and will be addressed by the family privately. Harry, Meghan and Archie will always be much loved family members." 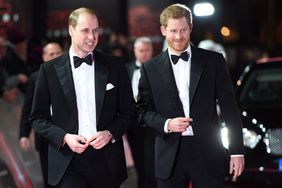