And a pair of super stylish gloves.

Kate Middleton embarked on day two of her royal tour of Denmark, and after looking regal in a polished (and affordable) blazer, the Duchess of Cambridge went from casual and back to chic again in a matter of hours.

For the first part of her day, Kate visited the Stenurten Forest Kindergarten and was pictured chopping wood and playing with the schoolchildren in black skinny jeans, a cream turtleneck, and a green hunting jacket. Tailored without being restricted, she paired the look with brown Chelsea boots and accessorized with only her sapphire engagement ring — oh, and a hammer.

A few hours later, Kate was back out and true to form, wearing a new coat-dress hybrid from Catherine Walker — one of her favorite British fashion designers — for a meeting with Queen Margrethe and Princess Mary. The double-breasted gray jacket featured black lapels and cuffs and was constructed from a textured wool fabric. Hidden underneath the chic coat was an LBD that hit below the knee. Meanwhile, a pair of stylish black leather gloves and pointed-toe stilettos added an elegant touch.

Yesterday, the royal met with parents and their children during a visit to the the University of Copenhagen, where she learned about the Copenhagen Infant Mental Health project run by researchers and scientists who aim to promote healthy relationships between infants and their guardians. And while early childhood development is one of Kate's key causes, she admitted that always being around babies makes her want to give George, Charlotte, and Louis another sibling.

"It makes me very broody," Kate said during the outing, according to People. "William always worries about me meeting under one-year-olds. I come home saying, 'Let's have another one.'" 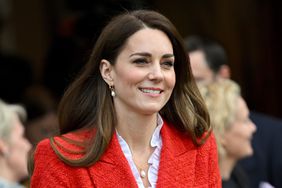