She was all business in beige.

Kate Middleton's first public appearance since taking her summer break was a somber one with a visit to an airbase, where she met with members of the British armed forces and civilian volunteers who helped thousands of people flee Afghanistan.

The base, which was about 80 miles away from London, played host to one of the massive C17 Globemaster transporter aircraft, which were integral in bringing refugees from the Kabul airport.

Middleton wore a structured beige blazer that matched her ladylike, top-handle bag. Both were in a soft beige color and she paired them with a pair of wide-leg blue trousers, chunky-heel pumps, and a simple white top. Her engagement ring was on full display and she wore her hair in her signature waves.

People reports that Middleton spent time with RAF aircrew and medics toured new facilities that were established to help incoming refugees. The new Repatriation Centre at RAF Brize Norton airbase provided "food, clothing, children's toys, medical support, and childcare and sanitary products" as people were being processed into the country.

The magazine adds that Kate's last appearance was at the Wimbledon final and the European soccer championships with Prince William and Prince George back on July 11. Earlier this week, the Cambridges attended James Middleton's wedding in the south of France — he tied the knot with financial analyst Alizée Thevenet. 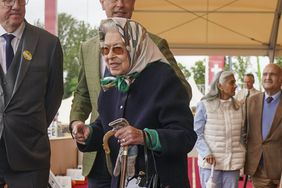