A few subtle differences in her beauty routine gave the Duchess a new look.

There's something about Kate.

It's not that she looks unrecognizable in her latest portraits, taken by Italian fashion photographer Paolo Roversi and released by the Cambridges in celebration of the Duchess's 40th birthday earlier this week — it's more that they feel somehow revealing. Like the public is getting a glimpse of a softer side of Kate, one which typically hides behind the lacquered shell of perfect, glossy blowout.

It might be easier to explain why the Duchess appears so different by explaining what these portraits are not: They are not the highly saturated, expertly retouched family photographs we're used to seeing a few times per year from the Cambridge family on birthdays and holidays. In those images, Kate appears flushed with color, her brunette curls as bouncy as her full, exquisitely contoured cheeks. They are not the lightly choreographed event photos that trickle onto our timelines a few times a week, showing Kate from a distance, smiling her impossibly wide smile, usually outfitted in a jewel tone coat with crisp corners.

The Kate Middleton we know, the Kate Middleton whose invincible barrel curls are undefeated against the elements — that Kate we'd describe as posh, polished, professional; expensive but not showy; stylish but not necessarily high fashion. Since she joined the royal family in 2011, meeting Prince William at the altar in a delicate lace Alexander McQueen dress, the image she has crafted is one of regal elegance, and she has tended to this image for the past 12 years.

In Roversi's hands, however, Kate is transformed.

A Palace source told the press that the Duchess, who studied art history at Saint Andrews University and is the patron of the National Portrait Gallery, where the images will hang, was inspired by photographer Cecil Beaton's portraits of Queen Elizabeth, Princess Margaret, and the Queen Mother from the mid century. Beaton, who also photographed some of the most glamorous stars in Hollywood history, including Marilyn Monroe and Audrey Hepburn, often shot the queen in profile facing left — or, as style reporter Elizabeth Holmes wrote, "looking to the past." The reference is a sign of respect — both to her grandmother-in-law, and to the institution of the monarchy itself.

Unlike the thousands of portraits of royals in European history, however, Kate forwent a tiara, flashy jewelry, and other showy displays of wealth. The refined chiffon gown, one of three designs by Alexander McQueen Kate wears in the portraits, is held delicately between Middleton's fingers in the third portrait, drawing the eye to but a single sapphire ring on her left hand — a ring that once belonged to Princess Diana. Middleton's decision to honor the late princess by wearing her ring as well as her pearl teardrop earrings is every bit as intentional as her homage to the queen's Beaton portraits. The jewelry symbolizes her understanding that the institution she inherits is not without scars, and that Diana's legacy will not be forgotten.

Middleton's makeup reflects its vintage inspiration, harkening to the days before Kim Kardashian taught us all to contour in 100 easy steps. The effect, along with the subtle sepia tones of the image, make her appear fair, almost Snow White-like in complexion, glowing without shimmering as the light finds new planes of her face, those usually in the shadow of a carved cheekbone.

Even her eyebrows, typically brushed and filled, are not quite as stark in contrast relative to the rest of her face. Her lips, framing a smile comparable only to that of Julia Roberts, are lacking the overly-plump pouty-ness that I, at least, have been conditioned to expect on the faces of the rich and famous. That nakedness, the truly "natural" look, seems by 2022 standards almost novel.

The Duchess's hair is the biggest departure from her typical beauty routine. The randomly placed waves, the subtle flyaways, the almost-invisible halo of frizz on the right side of her face — all imply an "I woke up like this" elegance, an effortless glamour that defies time and place.

A few writers have recognized a reference not just to Beaton, but to the pre-Raphaelites, especially as it concerns this undone, natural beauty look. Kate's portraits have the flat, perfectly-imperfect quality of one of the most popular pre-Raphaelite works, John Everett Millais's "Ophelia." By omitting the hyper realistic details, pre-Raphaelite works appear as though through a hazy filter — Instagram, but make it 18th century. That effect is seen most clearly in the close-up photograph of the Duchess, which is also the most intimate of the set, creating a romantic, almost ethereal image. It also almost conjures an '80s glamour shot, in that she looks like she was having fun.

What's most charming, though, across all the images, is that Kate appears relatably overjoyed to be photographed on her own in evening gowns worth thousands of dollars; as Holmes noted, she looks a bit like she's "playing dress-up." Like Diana, who adored a glamorous magazine photoshoot, and to whom the close-up portrait is likely a nod, Kate is taking the more playful aspects of the spotlight in stride. And with a million-dollar smile. 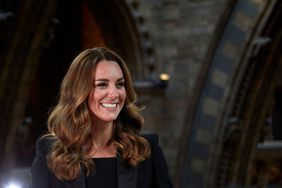