That explains the dates with Kim Kardashian lookalikes.

Kanye West doesn't do anything by the book, so it makes sense that new reports about his relationship with Julia Fox claim that the two are anything but conventional. According to Page Six, the rapper and his new girlfriend have evolved beyond monogamy and are currently in an open relationship. The reason? They want each other to be happy and free, untethered from the restraints of traditional roles and that whole Men Are From Mars, Women Are From Venus ethos. Sources say that everyone involved is on the same page and that means there's no jealousy in the equation at all.

"Their bond transcends typical norms because they're evolved beings who just want each other to be happy," a source close to Fox said. "There is no jealousy or bad vibes." The news comes as fans saw that Fox purged her feed, removing images of West and unfollowing several fan accounts. She explained the move on Instagram, saying she was merely doing some light housekeeping.

"Guys, relax. I unfollowed the fan accounts because I was tired of seeing myself," she said in a now-expired Story. "Suddenly Instagram was not a fun place anymore."

News of the open relationship dispels any rumblings of trouble between Fox and West. After an over-the-top, Birkin-filled birthday party and a Paris Fashion Week tour de force, West was seen out and about with Kim Kardashian lookalike Chaney Jones, whom he invited to a listening party for Donda 2. A second source said that West is "openly seeing" Jones and that the situation isn't ruffling any of Fox's Schiaparelli or Balenciaga-brand feathers. Page Six also notes that Fox is "talking to" someone on the East Coast, so everyone appears to be in agreement with the relationship status. 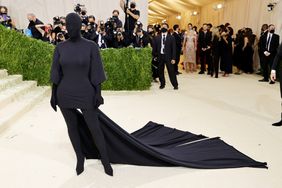