The actress shared every detail of their week-long romance in an essay for Interview magazine.

Julia Fox and Kanye West are officially a couple, and they announced the news in the most over-the-top way possible. An ordinary kissing selfie posted to Instagram wouldn't do, and instead, Fox wrote an essay — which was accompanied by PDA-filled photos taken by photographer Kevin Leyva — for Interview magazine about her week-long romance with the rapper, sharing just about every detail from their second date.

In the piece, aptly titled "Date Night," Julia revealed that she met Kanye on New Year's Eve in Miami and that they had an "instant connection." She wrote, "His energy is so fun to be around. He had me and my friends laughing, dancing, and smiling all night." The actress went on to add that they flew back to New York to see Slave Play followed by dinner at Carbone (one of her favorite restaurants). There, Kanye began to direct a full-fledged photoshoot amongst the other diners. "The whole restaurant loved it and cheered us on while it was happening," she said.

"After dinner Ye had a surprise for me," she continued. "Ye had an entire hotel suite full of clothes. It was every girl's dream come true. It felt like a real Cinderella moment." The results from the styling session were displayed alongside Julia's blog post for the outlet. In one photo, Kanye can be seen fitting Julia into a diamond-studded jacket, and in another, the two were caught making out on the floor of the dressing room.

Ye previously admitted that his love language is fashion. Back in November, he explained that a wardrobe overhaul is how he initially won over his estranged wife Kim Kardashian during an episode of Drink Champs. "That's how I bagged her in the first place," Kanye said of Kim. "I pulled up, I had the Balmains and the jackets and stuff, I pull the jackets and the shoes."

It appears as if the same move worked again in West's favor. Fox concluded her essay, writing: "I don't know where things are headed but if this is any indication of the future I'm loving the ride." 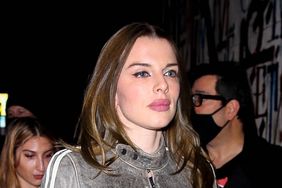 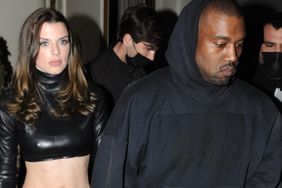