They met, got engaged, and married within six months.

How They Met: Following a summer fling with actor Henry Cavill in 2013, Kaley was set up with Ryan a month later on a blind date by their mutual friend.

"I had kind of an interesting situation over the summer, and I was kind of in a weird place and a very close mutual friend of ours said, 'Oh my god, have you met this guy Ryan?'" she recalled during an appearance on The Ellen DeGeneres Show. "I was just not in a good place to meet anyone. I said, 'I'm not ready. I'm taking time away from love for a while.' I was very sad. And they said, 'You know, he's coming to town. You've got one day to meet him, have a drink, and meet him.'"

Ryan was in Los Angeles to visit his doctor after suffering a back injury. Kaley agreed to go to dinner with him, and the next day, he moved in. Within days of hanging out, she knew he was "the one." "By day two I was like, 'Oh my god.' It was so unbelievable," she revealed. "I said, 'This is it, this is it.'" When you know, you know, and in a matter of months, Cuoco and Sweeting were engaged and got married on New Year's Eve that same year in front of 150 unsuspecting guests during a surprise ceremony.

Weeks later, Sweeting opened up about being a newlywed, gushing about his new wife at a pre-Grammys party. "We couldn't be happier. It's the best, the best moments of our lives," he said, adding that marrying Kaley has made his whole outlook on life "a lot more positive."

Why We Loved Them: Cuoco and Sweeting moved fast, and unapologetically so. Within six months, they met, got engaged, and married — and they didn't care how that may appear.

Ryan agreed, revealing in a rare interview that he knew Kaley was his soulmate. "I had never really felt that feeling before, really," he said at the time. "The second I got here I didn't want to go home. We spent every minute together, and I still haven't left from our blind date."

When They Peaked: Like other couples in whirlwind courtships, Kaley and Ryan couldn't keep their hands off of each other — whether on the red carpet, at the beach, or sitting courtside at a Lakers Game. Our favorite PDA moment, however? When they made out at Craig's in West Hollywood during a triple date with Haylie Duff and her boyfriend Matt Rose and Ali Fedotowsky and her husband Kevin Manno (the other two couples were also kissing).

Needless to say, it made for a great Instagram photo.

The Breakup: Nearly two years after rushing to the altar, Kaley and Ryan split. In September 2015, the Big Bang Theory alum filed for divorce, citing "irreconcilable differences" as the reason — and according to the couple's rep at the time, their separation was a mutual decision.

"Kaley Cuoco and Ryan Sweeting have mutually decided to end their marriage," read the full statement. "They ask for privacy at this time. No further statement will be issued regarding this matter."

Ryan continued to stay silent about the matter, while Kaley was more forthcoming with her feelings. During an appearance on The Ellen DeGeneres Show in February 2015, the actress told the host that she's in a "much better place." "You know, it's been rough, but things are going good," Cuoco said. "I'm much, much better now. I'm in a much better place than I was."

Three years after divorcing, Kaley opened up about what went wrong in her and Sweeting's marriage during an interview with Cosmopolitan. "I married someone for the first time who completely changed," Cuoco said. "The person I ended up with was not the person I originally met. And that wasn't my fault — that was his."

Where They Are Now: Cuoco is single, after separating from her husband of three years, Karl Cook, in September 2021. Just this month, Kaley vowed that she would never wed again. "I will never get married again. I would love to have a long-lasting relationship or a partnership," she told Glamour. "But I will never get married again. Absolutely not. You can literally put that on the cover."

While she's not dating at the moment, Cuoco is focused on her career. The actress is the lead in HBO's dark comedy The Flight Attendant, and the second season premieres on Thursday (April 21).

Sweeting has kept a low profile since his split from Cuoco. He retired from tennis in 2015 at age 28, and without a social media presence, the details of his dating life are unknown. 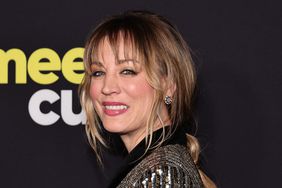