She slow burned right through my heart.

“Wow! This makes me feel good! I should do this all the time!” I think to myself every time I listen to music. And then I immediately forget that thought. I hardly listen to entire albums, rarely remember song names, and if I can sing along, it’s nothing short of a miracle. As for the last time I felt truly connected to a singer, it was unexpected. I hadn’t listened to country music since childhood, but when I started listening to Kacey Musgraves, I couldn’t stop. I absorbed her work into my being, to the point where on July 3, 2020, I was sent into a tailspin over the announcement that Kacey is divorcing her husband, fellow singer-songwriter Ruston Kelly, after three years of marriage.

While their breakup was a mutual, “healthy decision,” according to the couple, that didn’t soften its effect on me. All I could think about was Golden Hour — Musgraves’s 2018 album inspired by her relationship with Kelly — and about how that album reminded me of my own romantic timeline. Musgraves and Kelly met in 2016 at the Bluebird Café in Nashville and of what ensued, Musgraves told Glamour, “I started to see the world in a more fond, pretty light. After meeting this person who really allows me to just be myself, not have to walk on eggshells for any reason, songs started pouring out.” I could relate to the feeling, minus the Grammy award-winning songs.

In October 2017, the same month Musgraves and Kelly married, I met a soulmate in a singer (ironic, considering my music memory issues) named Jon. Like the famous couple, our relationship moved fast. Within three weeks of us meeting, Jon and I decided to become monogamous, and eight months after, we moved into a Los Angeles apartment together. By that time, Golden Hour had been released and, in my mind, was the soundtrack of our love.

“Lonely Weekend” reminded me of when I’d eagerly wait for Jon’s replies on Bumble, not wanting to get my hopes up (but getting them up anyway). I’d been on Bumble for several months, had a knack for connecting with L.A.’s finest fuckboys, and was “going to give up on dating any second now, I swear.” I’m glad I gave it one more shot. The song “Butterflies" felt as though it was playing in the background of my first few weeks with Jon — when we were flirting, it felt like my insides were playing hopscotch. During our first dates, I was so excited and nervous and terrified that I would get hurt, I thought I was going to faint.

When Jon would wholeheartedly accept me after learning about my Obsessive Compulsive Disorder struggles, my family traumas, and my deepest insecurities, it felt as though this line from Musgraves’s “Rainbow” was playing: “You hold tight to your umbrella, well, darlin' I'm just tryin' to tell ya / That there's always been a rainbow hangin' over your head.’’ Within weeks, I told him secrets I haven’t told friends I’ve known for years, and he continued to love me anyway. The song “Golden Hour” still feels like our entire relationship, a light I never thought I’d have in my life. When we saw Musgraves perform this track on Aug. 23, 2019, at Los Angeles’s Greek Theatre, I remember looking over at Jon, dancing and singing and letting go under the psychedelic lights, and feeling grateful to have found him.

I didn’t realize how much I’d internalized Musgraves’s Golden Hour, weaving its melodies with my own love and life story, until she announced her divorce. When the news broke, it made me pause. I suddenly questioned the album, and, as a result, its deep connection to my life and what made me feel stable. I asked myself, “Is it all bound to end?” and for the first time, I wondered about the mortality of my relationship with Jon. It felt as though the veil was lifted.

It took me several weeks to come to my own conclusions about what Musgraves’s breakup meant for Golden Hour. Though this was mostly an internal journey, I remember saying to Jon, “This is embarrassing, but Kacey’s divorce is making me overthink our relationship because of Golden Hour.” I honestly don’t think he reacted to that — which isn’t surprising because “Anna” and “overthinking” are likely synonymous in his mind — and without question, gave me the time I needed to process the news. Although the album reminded me of our relationship, my attachment to it felt personal, and this was something I needed to work out alone.

Over time, I grew to understand that Musgraves’s divorce did not invalidate Golden Hour, but that it was an extension of it. In my blurry 2020 vision, the meaning of the album continued to be revealed by the end of Musgraves and Kelly’s relationship: While beautiful moments may not last, at least we get to experience all they give and teach us in the meantime. At least they’ve changed our world for the better, in some way, somehow, at some time.

As Musgraves put it in her achingly relatable song "Happy & Sad," a moment can make you feel both happy and sad — but at least the moment happened in the first place. I may have listened to this song countless times, but I never truly heard its meaning until Musgraves announced the next phase of her relationship with Kelly.

While my relationship with Jon looks largely unchanged, it does feel different to me. Before, I was so wrapped up in my feelings for him that I never thought about our time coming to an end. Then, all at once, the thought of it shocked me. But now, I see our time together as a series of precious moments that yes, might not be forever. I don’t constantly think about us breaking up, but when the thought does arise, I’m able to accept it. Right now, Jon makes me feel loved, accepted, and respected; and when I imagine Future Anna looking back on this time, maybe she’ll be happy, sad, or both, but I know she’ll be grateful it happened at all. 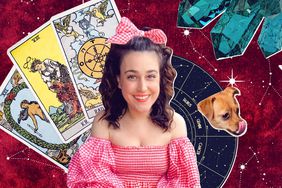