"They are hard to get right."

In a new interview with the New York Times, Roberts, who is returning to the genre after a two decade hiatus in the upcoming film Ticket to Paradise, revealed that she believes there was an overall lack of appreciation to the art of creating a successful rom-com back in the day.

"I think we didn't appreciate the bumper crop of romantic comedies that we had then," Roberts said. "You don't see all the effort and puppet strings because it's fun and sweet and people are laughing and kissing and being mischievous." She added, "This is a genre that I love to participate in and watch, and I think they are hard to get right. There is a really simple math to it, but how do you make it special? How do you keep people interested when you can kind of predict what is coming?"

Roberts memorably was the lead in cult-classics, such as Pretty Woman, My Best Friend's Wedding, and Notting Hill, while her costar George Clooney also had his own experience with the genre in One Fine Day.

Back in April, when it was first announced that she was be starring in Ticket to Paradise, Julia admitted that she hadn't appeared in a rom-com since 2001's America's Sweethearts because a good script "didn't exist." Explaining that she wasn't purposefully avoiding the genre, Roberts said, "People sometimes misconstrue the amount of time that's gone by that I haven't done a romantic comedy as my not wanting to do one.

She continued, "If I had read something that I thought was that 'Notting Hill' level of writing or 'My Best Friend's Wedding' level of madcap fun, I would do it. They didn't exist until this movie that I just did that Ol Parker wrote and directed." 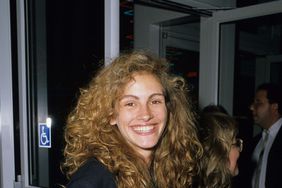