Every child and parent's worst nightmare.

Things recently got a little awk at the Alba-Warren household. The actress and business woman Jessica Alba and her husband Cash Warren opened up about an uncomfortable and teachable parenting moment on her YouTube show Getting Honest.

They told fellow parents Rachel Zoe and husband Rodger Berman about a time their daughter Haven, 9, walked in on them in the, er, bedroom.

"It was the worst," Warren recalled. "We like spent five minutes in our bedroom laughing. And being like, 'I can't believe we just ruined our daughter, we just ruined her.'"

But instead of laughing, the Honest Company founder says she "started crying." "I called Koa [Warren's sister]. She's so good at helping us through challenges, I feel like she just has such a kind, gentle soul," she said.

Jessica Alba, We See You in That Casual Pantsuit

Warren said after the incident, he had to go downstairs and speak with their daughter. "We just have to own this one. We can't pretend it didn't happen," he said. Alba added, "I think by the time we called Koa, Haven had already texted her. She went right in and told everyone."

Warren recalled going down to talk to Haven. "I went downstairs and said, 'Haven, I bet that's the last time you walk into our room without knocking,'" he laughed. "Now she knocks, it was like she learned her lesson."

The couple share three kids together daughters Honor, 12, and Haven, 9, plus son Hayes, 3. The Valentine's Day actress recently turned 40 and shared an adorable shot of their little family for the occasion. "My heart is full of hope and everything I do in life is for you #myfamily #thisis40," she wrote. 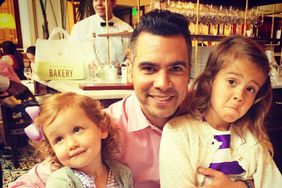 Cash Warren Shares a Moving Message About His Daughters