She also unfollowed him.

For some the final step of a breakup is to delete all evidence of an ex on social media and never look back, while others like to keep old photos as memories of what once was. Jennifer Lopez falls into the former camp.

Four months after announcing the end of their engagement, J.Lo has officially moved on and completely scrubbed her Instagram grid clean of Alex Rodriguez. According to Page Six, the singer deleted "every trace" of her ex on the social network — including a photo of the pair kissing in front of the Capitol Building at President Biden's inauguration earlier this year. Adding another virtual blow to the ego, she also unfollowed him.

Rodriguez, for his part, is still following Lopez on Instagram — at least as of Sunday morning.

Jennifer Lopez and Alex Rodriguez Are Both on Yachts in St. Tropez Right Now

When news first broke of their split back in April, the former couple revealed that they plan to stay friends. "We have realized we are better as friends and look forward to remaining so," they said in a joint statement. "We will continue to work together and support each other on our shared businesses and projects." Though, sometimes, hitting the "mute" button just won't cut it.

Since the breakup, J.Lo went back to her ex of two decades, Ben Affleck, while A-Rod isn't committing to one woman just yet. 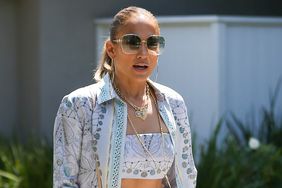