In the park, on a busy sidewalk — you name it.

The next stop on Bennifer's PDA tour? New York City.

Jennifer Lopez and Ben Affleck were photographed showing all the PDA during their latest outing in the Big Apple. Following J.Lo's show-stopping Global Citizen Live performance in Central Park on Saturday, the couple was spotted the next day simply unable to keep their hands to themselves.

The two looked absolutely smitten while walking around Madison Square Park holding hands, and at one point, they had to stop for a quick kiss. Shortly after, Jen and Ben made their way onto a busy sidewalk and pulled off to the side for a full-on make-out session — completely oblivious to the paparazzi snapping their photo and those passing by.

While publicly displaying of their love in the streets, Lopez wore a green plaid maxi dress that tied at the waist with a matching coat. Her hair was left down in loose waves and extended past her shoulders. Meanwhile, Ben opted for faded black jeans, a gray sweater blazer, and motorcycle boots (the same pair he wore to escort J.Lo down a flight of stairs after her set at the Global Citizen concert.)

According to People, Ben made a special trip to watch Jen perform in New York. "Jennifer and Ben were apart for a few days earlier this week. They met up in N.Y.C. yesterday," a source told the publication. "Ben wanted to be by her side and attended the event. He watched her perform." Ben reportedly had been in Austin working on his latest project, before stopping in LA to see his kids and reaching his final destination in NYC.

The insider continued, "They are always supportive of each other's careers. Ben has to be in Texas to film this coming week." 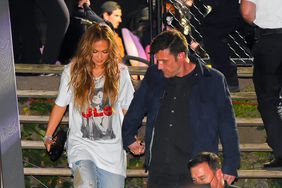