Everyone knows it's all about timing, and it seems that the timing for a Bennifer reunion couldn't be more perfect. A source told People that the two are in the "same mindset" after their respective breakups — Affleck and Ana de Armas split in January, and Lopez and Alex Rodriguez released a statement in April saying they were going their separate ways.

"Whether they end up together or not it's good for both of them now. And not that surprising," the source said. The two have allegedly even been in contact for months, with Affleck sending the "On the Floor" singer romantic emails, according to TMZ.

Well the reunion seemed quite surprising for the rest of the world. When J.Lo and Affleck started hanging out earlier this month, the entire internet pretty much lost their minds over the reconciliation of the early aughts "it" couple.

Affleck was first spotted at the end of April in a white Escalade that allegedly belongs to the singer and actress. Security details made it a point to try and hide the secret rendezvous, but of course, eagle-eyed fans discovered what was going on. But it wasn't long before the two were spotted hanging out again. While there's really no confirmation if the pair are back together, it seems that their relationship is no longer platonic — they even took a couple's trip to Montana.

Plus, a source told TMZ that Lopez "wants to give it a shot with Ben."

"They never really had closure and she has always wondered what could have been," the source continued. "The timing was never right and they were in different places until now. She finally has had the opportunity to spend time with him and see where this could lead. They are very comfortable together and it's easy. She wants to keep seeing him and is very happy." 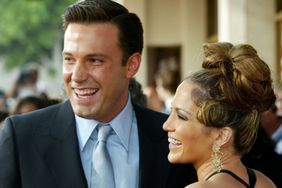