Aniston and Lisa Kudrow are big fans of the show's bloopers.

Jennifer Aniston and Lisa Kudrow have both enjoyed long and fruitful careers in Hollywood, but the conversation always returns to the project that made them each a household name: Friends.

In Variety’s Actors on Actors, the longtime friends and co-stars discussed their recent career moves, their upcoming HBO Max reunion special (on which details remain scarce), and the Friends scenes they couldn’t hold it together through.

Both actors admitted to sometimes finding themselves lost in an endless Friends blooper reel.

“This one time I was with Courteney [Cox], and we were trying to find something to reference, an old Friends thing. And then we stumbled on — there’s bloopers online — and we sat there at the computer like two nerds watching these bloopers laughing at ourselves,” Aniston told Kudrow.

Aniston said that when she rewatches episodes of the show she’s still able to identify the place in a scene where someone broke character.

Aniston then recounted some of the cast’s biggest goofs. “There was the scene when the bagpipes happened,” she said, referencing a scene in “The One with Joey’s New Brain,” a season 7 episode in which Ross tries to convince Chandler and Monica to let him play bagpipes at their wedding. “The bagpipes — where you started to sing full 100%-committed, with the bagpipes, sounding like the bagpipe — I couldn’t hold it together. No one could hold it together,” Aniston remembered. In the clip, you can actually see Aniston stifling her laughter.

“Then there was the episode where I guess Rachel had a sex tape,” Aniston went on, describing “The One with the Videotape” in season 8 (you know, with the “backpacking across western Europe” … ). “Every time I went to take the tape and step my foot on it, all of your reactions were like ‘No, no, no, no, no!’ That took us about 45 minutes, just that piece to shoot, because the laughing, we couldn’t stop it.”

Kudrow admitted that she doesn’t re-watch Friends. “I don’t watch the show,” she said. “I’m still not watching it in the hopes that one day we sit down and watch them together.”

As for the HBO Max special, which will commence shooting “if we ever get out of quarantine,” the actors don’t have a lot of answers. “We don’t know everything about it,” Kudrow said.

“We don’t know anything about it,” Aniston added.

“What we do know we can’t say,” Kudrow clarified. “I think we’re meant to be surprised by some things.”

Kudrow and Aniston both noted that they will not be playing their Friends characters in the special. 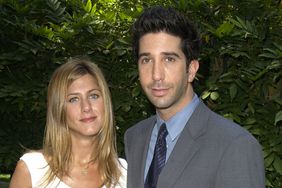