Jada and Will had a very special Red Table Talk today.

After statements from August Alsina made headlines, a representative for Jada Pinkett Smith said that the allegations were "absolutely not true." But today, during an episode of Red Table Talk on Facebook Watch, Smith clarified, saying that the statement wasn't directly from her — and her husband, Will, followed suit, saying that he had never released a personal statement either. In today's special episode, Jada admitted that she had an "entanglement" but clarified that it happened during a separation period in her marriage. As for Will granting "permission," both the Smiths clarified, saying it wasn't the case.

"At the end of the day, I don't like how all of this came to be. That doesn't matter, it's all love, honestly," Jada said. "That would be something I wouldn't comment on at all. I feel like it's a situation I consider private."

The two discussed the specifics of the situation, with Jada admitting that she and Will were going through a few issues in their marriage. Will went as far as to say, "I was done with you."

"What August was trying to communicate [...] I think he wanted to make it clear he's not a homewrecker," Jada said of Alsina's statements. When Will asked her to explain "clearly what happened" between her and August, she did.

"I got into an entanglement with August," she said. "A relationship, it was a relationship, absolutely. I was in a lot of pain, I was broken and in the process of that relationship, I definitely realized that you can't find happiness outside of yourself. And luckily enough, you and I were also going through a process of healing in a much different manner. It had been so long since I felt good." She added that it was a "joy to help heal somebody."

While many will call the situation infidelity, Jada was quick to point out that she doesn't see it as a transgression. "I was really able to do some really deep healing," she said. Jada and Alsina elected to stop when Jada decided that she was going to work things out with Will and at the time, she thought things were done forever.

"I let that be and hadn't talked to him since," Jada said. "So it is a little weird all this stuff is coming out now since this was several [years ago]." Will said that part of the surprise came from the fact that they'd already moved on: "Our experiences of working through it, fighting through it, talking through it and therapizing through it, I think the why now is weird."

The two continued, saying that their relationship is something that they're both continuing to work on and that they still surprise each other.

"You didn't think that I had the girth that it was gonna take to ride with you through," Will said.

"I didn't know if you would be willing to find the deep capacity to love me," Jada said.

When he asked how he was doing, though, Jada assured him that he was doing great and the two finished the conversation with a high-five.

"You gotta go through some shit to get the answers," Jada said. 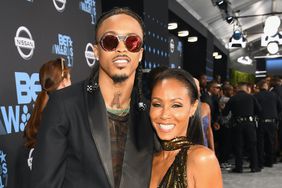