Jack Nicholson Grew Up Believing His Mom Was His Sister

For nearly four decades, Jack Nicholson believed that his mother, June, was his sister, and that his grandmother, Ethel May, was his mother. Sound confusing? It is. June got pregnant in 1936 by her boyfriend Don, who was married to another woman at the time. Ethel May threatened Don with the Mann Act (a law intended to curb the trafficking and prostitution of minors, but which was often used to criminalize even consensual acts) upon learning of her daughter's pregnancy, and ordered he stay away from June. Nicholson was born in 1937 in Neptune, N.J.

June was only 18 at the time of Jack’s birth, and had aspirations of stardom. To avoid the shame a child out of wedlock would bring the family, Ethel May raised Jack as her own, pretending June was his much older sister. But nobody ever bothered to explain this to young Jack. (He grew up not knowing his father. Shorty, who was married to Jack’s aunt, Lorraine, acted as a father figure.)

June moved out when Jack was four, fleeing to Miami to become an Earl Carroll showgirl. Their relationship became even more bizarre when Nicholson decided to pursue a career in Hollywood. He headed west to Los Angeles at 17 to join his “sister” June, who had relocated there to try and make it in showbiz. “Since my only relative in the world was June, who was out here, I came out to look around,” he told Rolling Stone in 1986. Nicholson got a job as an office boy in the animated cartoon department at MGM Studios. His reckless charm got him discovered by a producer, who recommended he sign up for acting classes.

In 1974, as Chinatown was about to hit theaters, Time magazine profiled the enterprising 37-year-old who had made a staggering 15 films in the ’70s and received an Oscar for his work in One Flew Over the Cuckoo’s Nest. “The Star with the Killer Smile” read the strapline on the cover. Before its publication, Nicholson received an alarming phone call from the magazine’s researchers, who got in touch to clarify some of the facts in the story. They told him that his father was alive, and living in Ocean Grove, N. J.. The second blow was much worse: his “mother,” Ethel May, was actually his grandmother; his “sister,” June, was his real mother. The usually placid, cavalier Nicholson was shaken, and asked Time not to publish these findings in the piece.

He called up his brother-in-law. “Shorty, this is the most fucked thing I’ve ever heard,” he said, according to Patrick McGilligan’s biography Jack's Life. “A guy calls me on the phone, and says that my father is still alive, and that Ethel May wasn’t really my mother, that June was my mother.” Shorty denied this at first, but eventually relented and handed the phone to Lorraine, who confirmed all of this as true. However, she wasn’t able to tell him if the person in question living Jersey — Don Furcillo-Rose — was his real father.

Nicholson was sent into a tailspin. He told director Mike Nichols to keep a close eye on him during production of The Fortune, the film he made following Chinatown, after he learned the news. What was more disconcerting was that Chinatown was beginning to cash in at the box office, a film which includes a subplot of incest. Nicholson’s character beats Faye Dunaway’s into admitting that her sister is, in fact, her daughter.

Both Ethel May and June had passed away by the time Jack discovered the truth, so he was unable to confront them with this revelation. Nicholson says though his discovery was “dramatic,” it “wasn’t what I’d call traumatizing.”

“I was very impressed by their ability to keep the secret, if nothing else,” Nicholson later admitted to Rolling Stone. “It’s done great things for me.” He has since jokingly referred to June as his “sister-mother” in the press, but hasn’t spoken much of it since.

#Hollyweird is a weekly column about celebrities' forgotten or buried strange-but-true stories. 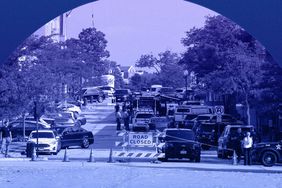 "We Were Lucky": One Mother's Experience At the Highland Park Parade